The Akron, Ohio, metropolitan statistical area, as defined by the United States Office of Management and Budget, is an area consisting of two counties, Summit and Portage, in Northeast Ohio and is anchored by the city of Akron. As of the 2010 census, the MSA had a population of 703,200.

The Akron MSA is also part of the larger Cleveland–Akron–Canton, OH Combined Statistical Area with a population 2010 of 3,515,646, the largest metropolitan area in Ohio. 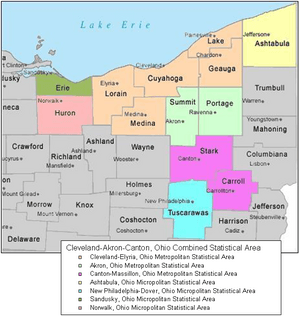 Map of the Cleveland-Akron-Canton CSA Based on 2013 U.S. Census Definitions. The Akron MSA is displayed in green. 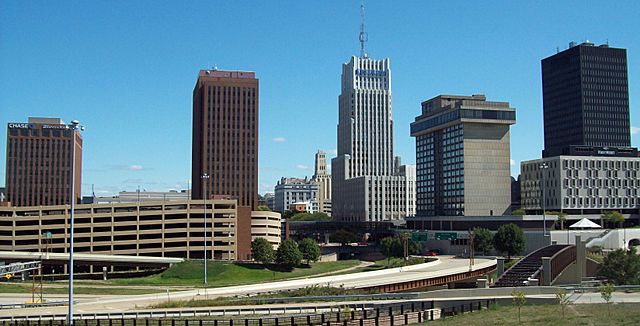 View of the Akron skyline from the west looking east

As of 2006[update], the Akron metropolitan area serves as the corporate headquarters of 5 Fortune 1000 firms (shown with 2006 rankings below):

Other large employers include:

Cuyahoga Valley National Park is a national park located in Summit County and lies between the major Ohio cities of Cleveland and Akron. It is the only national park located in Ohio and consists of over 33,000 acres. Waterfalls, rolling hills, caves, winding river scenery attract many park visitors. Over 125 miles of trails traverse the steep narrow ravines, rolling floodplain, and lush farmland throughout the park. The park offers an array of preserved and restored displays of 19th (see Hale Farm & Village) and early 20th century sustainable farming and pastoral, rural living, while catering to contemporary interests with art exhibits, outdoor concerts, and scenic excursion and special event railroad tours on the Cuyahoga Valley Scenic Railroad.

The Ohio and Erie Canal Towpath Trail in Summit County follows the course of the former Ohio and Erie Canal. When the trail is fully complete, it will stretch about 100 miles from Downtown Cleveland in Cuyahoga County, though the Cuyahoga Valley National Park and Summit County, Stark County and end in New Philadelphia in Tuscarawas County. In 2011, Summit County became the first of the counties to complete their section of the Towpath Trail stretching 33.4 miles from the Portage Lakes in the southern portion of the county, through the suburbs and downtown Akron, and finally through the Cuyahoga Valley National Park.

The Portage Park District is a county park district in Portage County that consists of 1150 acres. Notable trails include the Headwater Trail which follows the former Cleveland and Mahoning Valley Railroad line and connects Mantua and Garrettsville. The Freedom Trail/Portage Hike and Bike Trail is currently being constructed and will connect with existing trails in Summit County.

Nelson Kennedy Ledges State Park is a 167-acre state park located near Garrettsville in Portage County. The spectacular rock formations at Nelson-Kennedy Ledges have become trademarks of the park. These rock formations are among the few outcrops in northern Ohio still exposed to view and offer hiking trails ranging from easy to difficult. Activities located in the park include hiking and picnicking.

West Branch State Park is an 8,002 acre state park located near Ravenna in Portage County. The large 2,650-acre lake can be used for boating, fishing, and swimming and contains numerous boat launches. The 5,379-acres of meadows and woodlots can be used for numerous activities such as for camping, hiking, hunting and horseback riding. The park maintains 14 miles of hiking trails, 12 miles of mountain biking trails, and 20 miles of bridle trails.

Wingfoot Lake State Park is a 690-acre state park located in Mogadore in Portage County around Wingfoot Lake. The park was built in the 1960s by the Goodyear Tire and Rubber Company for their employees and corporate retreats. In 2009, the park was bought by the Ohio Department of Natural Resources, Division of Wildlife. Facilities include enclosed and open pavilion shelters (some with fireplaces), playgrounds, badminton courts, horseshoe pits, bocce ball courts, an 18-hole mini-golf course, and an 18-hole disc golf course. Boating and fishing is also permitted on the 444 acre Wingfoot Lake.

The Akron metropolitan area is served by the following international, regional and county airports:

In Summit County, public transportation is available through the METRO Regional Transit Authority system, which has a fleet of over two hundred buses and trolleys and operates local routes as well as running commuter buses into downtown Cleveland. The Portage Area Regional Transportation Authority (PARTA) operates throughout Portage County and also runs an express route connecting the University of Akron with Kent State University.

All content from Kiddle encyclopedia articles (including the article images and facts) can be freely used under Attribution-ShareAlike license, unless stated otherwise. Cite this article:
Akron metropolitan area Facts for Kids. Kiddle Encyclopedia.