Alexander Dennis is a British bus and coach maker, based in Larbert, Scotland. It has made buses and coaches since 2001 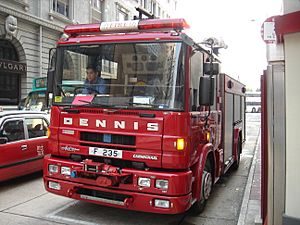 Complete buses (or chassis/body only)

TransBus/Alexander Dennis built fire-fighting vehicles until 2007. The bodywork on a majority of the chassis are built by a neighbouring company, John Dennis Coachbuilders Limited.

All content from Kiddle encyclopedia articles (including the article images and facts) can be freely used under Attribution-ShareAlike license, unless stated otherwise. Cite this article:
Alexander Dennis Facts for Kids. Kiddle Encyclopedia.