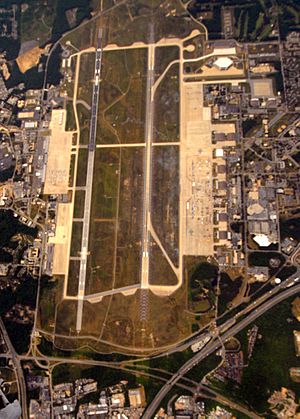 Andrews Field is the airfield portion of Joint Base Andrews which is under the jurisdiction of the United States Air Force. In 2009, Andrews Air Force Base merged with Naval Air Facility Washington to form Joint Base Andrews. Andrews is the home base of two Boeing VC-25A aircraft with the call sign Air Force One when the president is on board, that serve the President of the United States.

The host unit at Andrews is the 11th Wing, assigned to the Air Force District of Washington. It is responsible for maintaining emergency reaction rotary-wing airlift and other National Capital Region contingency response capabilities critical to national security, and for organizing, training, equipping and deploying combat-ready forces for Air and Space Expeditionary Forces (AEFs). The wing commander is Colonel Kenneth R. Rizer. The Command Chief Master Sergeant is Chief Master Sergeant Anthony Brinkley.

For statistical purposes the base is delineated as a census-designated place by the U.S. Census Bureau. As of the 2010 census, the resident population was 2,973.

Union American Civil War troops used a country church near Camp Springs, Maryland for sleeping quarters (now named Chapel Two) and on 25 August 1941, President Roosevelt directed use of the land for an airfield.

Andrews Field was named on 7 February 1945 in honor of Lt Gen. Frank Andrews and in 1946, Andrews was a sub-base of Bolling Field (3 January 1946 – 20 November 1946). Strategic Air Command headquarters transferred from Bolling Field to Andrews . The command of CONAF's Radar Bomb Scoring detachments (e.g., at Dallas Love Field) transferred to Andrews on 17 March 1946 when the "263 AAF BU" was assigned (transferred 23 February 1948) to Carswell AFB).

Andrews transferred from the Army to the 1947 United States Air Force and Headquarters Command held command reins at Andrews from 1947 through 1952 and again after 1957. Headquarters Military Air Transport Service controlled the base during the interim period. The year 1947 marked the arrival of the first permanently assigned jet-powered aircraft, the F-80 Shooting Star, at Andrews. The long-lived and versatile training version of the F-80, the T-33, still played an important role in proficiency flying programs at Andrews more than 30 years later.

Andrews Air Force Base was designated on 24 June 1948, and in June 1950, Andrews rapidly became involved in combat readiness training for B-25 Mitchell medium bomber crews. Combat readiness training and proficiency flying for military pilots assigned non-flying duties in the Washington area have remained two key elements in the local mission since the establishment of the base. HQ Air Research and Development Command (later, Air Force Systems Command) moved to Andrews from Baltimore, 24 June 1958. With the construction of new facilities beginning in 1959, Andrews had become by early 1962 the primary USAF flight installation serving the Washington, DC, area with the closing of the runway at Bolling AFB.

Andrews' air defense role was strengthened in the 1950s with the latest in fighter-interceptor hardware appearing on the flight line. F-94 Starfires, F-102 Delta Daggers and finally, F-106 Delta Darts formed the backbone of the three fighter interceptor squadrons which operated from the base until 1963.

In the late 1950s Andrews began an annual open house and air show on base. This event later evolved into the Department of Defense Joint Services Open House, an annual event that now brings more than 700,000 visitors to the base every year. The open house is held every year over Armed Forces Day weekend.

In the years since 1959, Andrews' flight operations and importance have increased greatly. In 1961, the last of the Military Air Transport Service's flying units at Washington National Airport transferred to Andrews. This was followed a year later by the transfer to Andrews of all fixed-wing flying activities from Bolling Air Force Base. Andrews has become firmly established as the main port of entry for foreign military and government officials en route to Washington and the United States. In July 1961, the official presidential aircraft was stationed here, known as "Air Force One" when the president is on board. Before 1961, the presidential airplane had been kept at Washington National Airport and Bolling AFB.

In 1963, the Naval Air Facility (NAF), originally established at the former NAS Anacostia in 1919, moved to Andrews. The NAF handles Naval VIP flight operations. The Marine Corps detachment that flies the FA-18 Hornet is located here.

In a major reorganization, Headquarters Command, U.S. Air Force, was disbanded 1 July 1976, restructured under the Military Airlift Command as the 76th Airlift Division and transferred its headquarters from Bolling AFB to Andrews. The 76th remained the parent unit of the Andrews host command, redesignated as the 1st Air Base Wing.

On 12 July 1991, the 89th Military Airlift Wing was redesignated as the 89th Airlift Wing and assumed duties as the host wing at Andrews AFB. Support functions previously performed by the 1776th Air Base Wing now fall under the 89th and the 1776th was inactivated. With the consolidation of the two wings, the newly formed 89th Airlift Wing is one of the largest wings in Air Mobility Command with a work force approaching 9,000 people.

Known as "The President's Wing," the 89th Airlift Wing continues to contribute to Andrews' rich history as the elite Air Mobility Command wing for transporting VIPs around the world. Not only does Andrews provide service for America's senior officials, but also kings, queens, presidents, prime ministers, popes, and local and foreign military leaders make Andrews AFB their first stop in the United States.

On 5 January 2005 the Air Force reactivated the Air Force District of Washington (AFDW) as the single Air Force voice for planning and implementing Air Force and joint solutions within the National Capital Region (NCR). This event brought with it significant changes at Andrews. On 12 May 2006, the 89th Medical Group at Andrews and the 11th Medical Group, Bolling Air Force Base, Washington, D.C. combined into the 79th Medical Wing where it established its headquarters at Andrews. In June 2006, the 316th Wing stood up under the command of AFDW as the new host unit for Andrews Air Force Base and its nearly 50 tenant units to include organizations from the U.S. Army, the Air Force Reserve Command, Air National Guard, Navy Reserve, Marine Corps Reserve and the Civil Air Patrol. The activation of the 316th prompted the transfer of the 1st Helicopter Squadron from the 89th Airlift Wing to the 316th Operations Group. In May 2007 the AFDW, as well as the 844th Communications Group, transferred from Bolling AFB to Andrews AFB.

The following units are based at Andrews:

The 89th Airlift Wing is responsible for worldwide special air mission airlift, logistics and communications support for the President, Vice President and other U.S. senior leaders. Air Force One is assigned to the 89th AW.

The Air Force District of Washington (AFDW) is composed of two wings, one group and two Ceremonial Elements. The 11th Wing and the 79th Medical Wing at Joint Base Andrews. Also under AFDW is the Air Force Operations Group (AFOG) at the Pentagon and the 844th Communications Group. The Air Force Operations Group is the principal operational entity of the Air Staff in support of the Secretary of the Air Force and the Chief of Staff of the Air Force. The 79th Medical Wing and 844th Communications Group both have specialized missions where they will be the single Air Force voice in the National Capital Region (NCR) for their respective fields of expertise. The 11th Wing will fulfill duties as the host base organization of Andrews while also supporting AFDW requirements. Through the U.S. Air Force Band and the U.S. Air Force Honor Guard, the 11th Wing also provides ceremonial and musical support throughout the National Capital Region and worldwide.

The 79th Medical Wing is the Air Force's single medical voice for planning and implementing Air Force and joint medical solutions within the National Capital Region (NCR). Activated on 10 May 2006, it is the largest wing within the Air Force District of Washington and only the second medical wing in the Air Force. 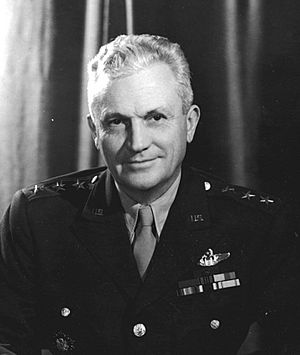 Andrews Field and Joint Base Andrews are named for Lieutenant General Frank Maxwell Andrews (1884–1943), former Commanding General of United States Forces in the World War II European Theater of Operations. General Andrews organized and commanded the General Headquarters, Air Force (1935–1939), and at the time of his death on 3 May 1943 in the crash of a B-24 Liberator in Iceland, he was Commanding General, United States Forces, European Theater of Operations. 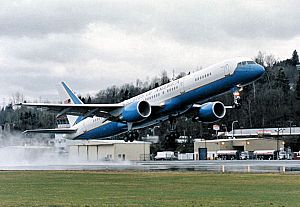 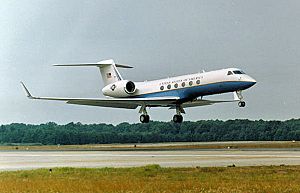 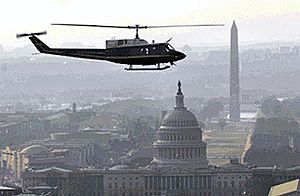 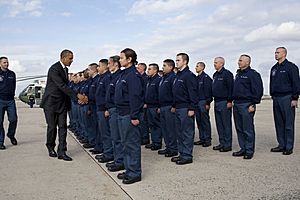 President Barack Obama greets personnel at the base in October 2010. 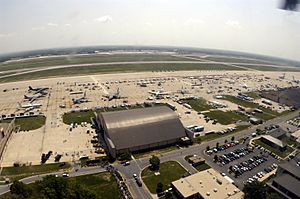 There were 1,932 households out of which 75.9% had children under the age of 18 living with them, 86.1% were married couples living together, 7.3% had a female householder with no husband present, and 3.5% were non-families. 3.2% of all households were made up of individuals, none of whom was 65 years of age or older. The average household size was 3.39 and the average family size was 3.44.

All content from Kiddle encyclopedia articles (including the article images and facts) can be freely used under Attribution-ShareAlike license, unless stated otherwise. Cite this article:
Andrews Field Facts for Kids. Kiddle Encyclopedia.