Bay View is an unincorporated resort community and census designated place (CDP) in the U.S. state of Michigan. It is located in Bear Creek Township, Emmet County on Little Traverse Bay and abuts the east side of the city of Petoskey along U.S. Highway 31. The ZIP code is 49770 and the FIPS place code is 06260. It was originally formed as part of the Methodist Camp Meeting movement and later adapted to the precepts of the Chautauqua movement. As of the 2010 census the population of the CDP was 133. 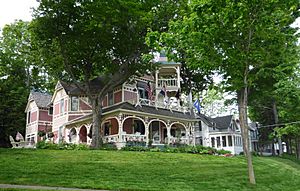 The Bay View Association of the United Methodist Church was founded in 1875 by a group of Methodists to be a retreat. The group considered multiple locations, and eventually struck a deal with the citizens of Petoskey and the Grand Rapids and Indiana Railroad, where the Petoskey citizenry would pay to extend the railroad line from their town to Bay View, the railroad would purchase the site, and the Methodists would agree to improve the location and hold camp meetings there over the next fifteen years. In 1876, the first group of Methodists travelled to the site, cleared an area of underbrush, and built a preaching stand and and audience area under the trees. On August 2, 1876, the first meeting was held at the site. Shelter at the time was only in tents. Construction of cottages began almost immediately, and by 1881 there were about 150 at the site.

In 1879, an artesian well water system was installed, providing spring water to the cottages. However, the pipes were laid very shallowly, and had to be drained in the winter months to prevent freezing. Then, as now, the community closed from November through April, during which time the residences must be vacated.

A Chatauqua program, a series of educational of lectures and music, began in 1886, and the community developed around these activities. These programs, along with programs for children and a variety of classes, run from May through October of each year. The program was immensely successful, and the number of cottages in the community soared, with 200 in 1887, 400 in 1895, and 500 in 1901. Many of these newcomers were from other, non-Methodist denominations, and many stayed all summer rather than for only a few weeks of the year. In the late 1880s, the Bay View Summer University opened. The University was absorbed into Albion College about 1918 and remained open into the 1960s.

The local camp was listed as a National Historic Landmark district in 1987 as one of the best-preserved examples of the Methodist Camp Meeting movement, as originally built in 1876, and adapted to the Chatauqua movement in 1885 through 1915.

Bay View is modeled on Methodist camp meeting resorts, such as Wesleyan Grove on Martha's Vineyard, Ocean Grove, New Jersey, or Lakeside, Ohio. The structures on the Bay View community consist of approximately 440 cottages and 30 community-owned buildings. There are two hotels on premises: Stafford's Bay View Inn (1886), and The Terrace Inn and 1911 Restaurant. Other facilities include a post office, beach with a swim area, children's pool and a sail house. The community is located on about 340 heavily wooded acres (140 ha), dropping in a series of terraces from a 200-foot elevation (61 m) to the shore of Little Traverse Bay.

Nearly all the structures in the community were built in the 1875-1900 time period. Most buildings are Eastlake and Stick style, with some Queen Anne and Shingle style architecture. Cottages are set on 50-foot lots (15 m) along gently curving streets running along the natural terraces. In the center of the community is The Campus (originally Tabernacle Park). Many of the larger communal structures are located here, including the original 1877 preaching stand, as well an 1880 book store and multiple educational buildings constructed around 1890.

All content from Kiddle encyclopedia articles (including the article images and facts) can be freely used under Attribution-ShareAlike license, unless stated otherwise. Cite this article:
Bay View, Michigan Facts for Kids. Kiddle Encyclopedia.