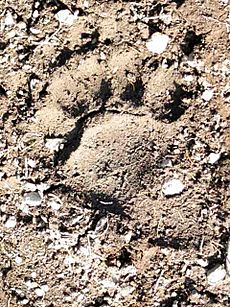 Bear print in the driveway of a home in Anchorage, Alaska

There are many grizzly and black bears in Anchorage, Alaska.

There are between 200 and 300 black bears living in the city, according to a rough estimate given by State of Alaska wildlife biologist Rick Sinnott. DNA studies based on collected hair samples have shown that the city is also home to at least 36 grizzly bears. (That figure, however, is likely an underestimate: hair was collected from only seven of eleven grizzly bears that had been radio-collared in a separate study.) Anecdotal accounts suggest that bear sightings are increasing in frequency, but biologists are skeptical that this increase in observations is indicative of a population increase.

Spawning salmon in Campbell Creek attract many bears to the city from the Chugach Mountains.

Though bear populations may not be increasing, human–bear encounters are on the rise. As Anchorage's population has increased and urbanization has removed forest, bears have become easier to spot.

In the late 1990s, Anchorage residents responding to a survey indicated that they wanted more animals, including bears, in the city. It is unclear whether attitudes have remained the same, with some people growing uncomfortable with increasing bear encounters.

Recent laws have made it illegal to put out garbage before the morning of trash day,

In 1995, two runners were killed by a bear just south of the city on the McHugh Creek trail. Two maulings in July and August 2008 were the first maulings in the city proper in modern times.

All content from Kiddle encyclopedia articles (including the article images and facts) can be freely used under Attribution-ShareAlike license, unless stated otherwise. Cite this article:
Bears in Anchorage, Alaska Facts for Kids. Kiddle Encyclopedia.