Beer in Ireland facts for kids 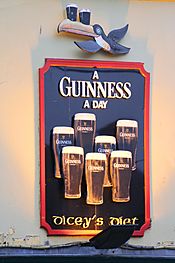 Brewing in Ireland has a long history. Production currently stands at over 8 million hectolitres, and approximately half the alcohol consumed is beer.

In the 18th century, the Irish Parliament used taxation to encourage brewing at the expense of distilling, reasoning that beer was less harmful than whiskey. In the 1760s, the Royal Dublin Society offered prizes to brewers who used the most Irish hops and those that produced the most porter.

Brewing prospered in the early decades of the 19th century and by 1814 Ireland was exporting more beer to England than it imported. Irish exports to England accelerated as the century progressed and from a modest 11,328 barrels in 1828, exported 689,796 barrels by 1901. 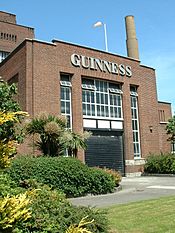 Stout brewed by Guinness (and the smaller brewers Murphy's and Beamish) once dominated domestic beer consumption in Ireland, with lager and ale having much smaller shares. Lager has subsequently grown in popularity with Carlsberg taking 8% of the market and Budweiser 7% in 2014.

Draught Irish stout is normally served nitrogenated, to create a creamy texture with a long-lasting head. 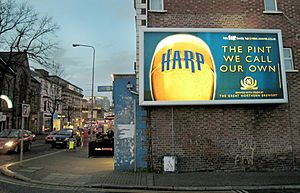 Irish lager advertisement: "Harp, the pint we call our own."

The first lager brewery in Ireland was set up in Dartry, Dublin, in 1891, but did not survive very long. Lager was later brewed for a short period at the Regal Brewery, Kells. Harp Lager has been brewed since 1968, originally in Dundalk.

Heineken Ireland, based at the Murphy Brewery in Cork, have the largest share of the lager market. In addition to Heineken, they brew Amstel and Coors Light, as well as the brands they acquired from Beamish & Crawford including Fosters and Carling.

Tennent's, although brewed in Glasgow in Scotland, is a very popular pale lager in Ulster, especially in Northern Ireland and County Donegal (mainly East Donegal and Inishowen).

Beginning in the 1990s, brewpubs and microbreweries began to emerge. While some, such as the Biddy Early Brewery, Dublin Brewing Company and Dwan's, have since ceased production; others such as Porterhouse have celebrated twenty years in business, while the Hilden Brewery in Lisburn is Ireland's oldest independent brewer, having been established in 1981. The Carlow Brewing Company, established in 1996 and makers of the O'Hara's range, is another survivor of the "first wave" of Irish craft brewing, as is the Whitewater Brewing Company in Castlewellan, County Down, also established in 1996.

The "third wave" of Irish craft brewing began in 2013. The surge of new breweries is largely a result of changes in excise requirements, access to EU funding, and an increase in government-funded brewing education courses. Many second- and third-wave brewers are also involved in a professional brewers' association, Beer Ireland, which has provided members with networking opportunities and information on setting up a brewery. 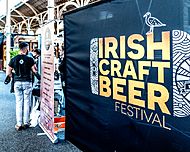 Despite the low market share, macro breweries have begun to produce product lines targeting this sector of the market. Heineken Ireland began marketing a pale ale, "Cute Hoor", distributed in the craft beer sections of supermarkets and off licences and without plainly identifying the brewer. Heineken also briefly deceptively marketed "Blasket Blonde", in Kerry, from March 2015 to September 2016, and "Beanntrai Bru" in Cork in August 2016, as locally-made craft beers, from invented breweries.

C&C Group produce 'Roundstone' Ale and 'Pana Cork' Lager at their facility in Clonmel. Both Heineken Ireland and C&C were investigated for these naming practices in 2016

Carrig Brewing Company and Brú Brewery, both of which operated pubs in addition to brewing, merged operations in 2019 with brewing moved to Brú's facility in Trim, County Meath

As in other countries, international brewers and drinks companies have acquired independent craft breweries in Ireland, too, in order to either protect their market share or to expand their own portfolios. Cork's Franciscan Well Brewery was acquired by Molson Coors in 2013. It continues to brew the main Franciscan Well beers, but now also markets a mainstream lager, "Archway" with the parent firm name abbreviated to "MCBC" on packaging. The Eight Degrees Brewery was acquired by Irish Distillers, the producer of Jameson Irish Whiskey in 2018, in order to secure a supply of barrels used to brew stout and IPA for its "Caskmates" range.

Investment without full takeover has occurred at some breweries. 32% of the Carlow Brewing Company has been acquired by Hijos de Rivera Brewery, the makers of Estrella Galicia

While Ireland has little history of the tied house system - outside of Cork where both major breweries had, but eventually disposed of, substantial estates - craft breweries have experienced problems in gaining taps in pubs. A number of craft breweries now operate pubs, on-site restaurants or entire pub chains to provide outlets with guaranteed availability. These include Brú Brewery, Carrig Brewing, Dead Centre Brewing, Galway Bay Brewery, The Porterhouse, Rascals Brewing and Rising Sons Brewery 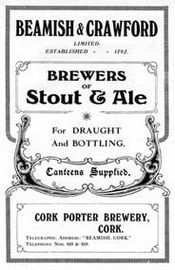 There are three brewing associations operating in Ireland.

Beoir (Irish for "beer"), founded in July 2010, is an independent group of consumers which seeks greater choice, quality, and value-for-money for beer and cider drinkers on the island of Ireland. Their primary goal is to support and raise awareness of Ireland's native independent microbreweries and craft cider-makers.

A number of beers claim an Irish provenance or are commissioned by Irish companies, but are produced outside Ireland. In the past these have included Árainn Mhór beers and Time Lager. Today, the Strangford Lough Brewing Company produces a concentrated wort which they export to Great Britain and the US where contract breweries turn it into finished beer.

Many breweries outside Ireland produce Irish-themed beers which are not commonly available in Ireland, such as Killian's Irish Red and Wexford Cream Ale.

In 19th and early to mid-20th century Ireland, a spirit grocery combined a public house and an ancillary retail business, usually a grocery or hardware shop. Several spirit groceries can still be found in rural towns and villages.

All content from Kiddle encyclopedia articles (including the article images and facts) can be freely used under Attribution-ShareAlike license, unless stated otherwise. Cite this article:
Beer in Ireland Facts for Kids. Kiddle Encyclopedia.