The Boise City–Nampa, Idaho Metropolitan Statistical Area (MSA) (commonly known as the Boise Metropolitan Area or the Treasure Valley) is an area that encompasses Ada, Boise, Canyon, Gem, and Owyhee counties in southwestern Idaho. It is distinct from the wider Boise City–Mountain Home–Ontario, ID–OR Combined Statistical Area, an area consisting of seven counties in southwestern Idaho, and Malheur County, Oregon anchored by the cities of Boise and Nampa. It is the state's largest officially designated metropolitan area and includes Idaho's three largest cities: Boise, Nampa, and Meridian. Nearly 40 percent of Idaho's total population lives in the area.

Boise, from its foothills

As of the 2019 estimate, the Boise City–Nampa, Idaho Metropolitan Statistical Area (MSA) had a population of 749,202, while the larger Boise City–Mountain Home–Ontario, ID–OR Combined Statistical Area (CSA) had a population of 811,961. The metro area is currently the third largest in the U.S. section of the Pacific Northwest after Seattle and Portland, and has replaced Akron metropolitan area as the 80th-largest metropolitan area in the United States. 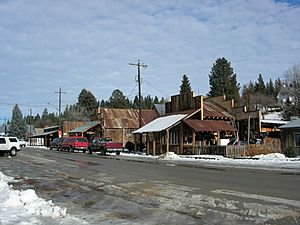 All content from Kiddle encyclopedia articles (including the article images and facts) can be freely used under Attribution-ShareAlike license, unless stated otherwise. Cite this article:
Boise metropolitan area Facts for Kids. Kiddle Encyclopedia.