Bridges of Pittsburgh facts for kids 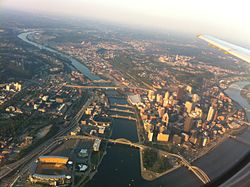 Seventeen of Pittsburgh's bridges are visible in this aerial photo.

The Bridges of Pittsburgh play an important role in the city's transportation system. Without bridges, the Pittsburgh region would be a series of fragmented valleys, hillsides, river plains, and isolated communities.

A 2006 study determined that Pittsburgh has 446 bridges, and with its proximity to three major rivers and countless hills and ravines, Pittsburgh is known as "The City of Bridges". The city of Pittsburgh and Allegheny County are the largest owners of great bridges in the country, in proper proportion to their size, with the possible exception of the City of New York, which is built on an island and surrounded by large bodies of water.

According to a 2011 study by Transportation for America, 1,194 bridges in the Pittsburgh area—or 30.4%—were deficient, the highest proportion in the nation.

Pittsburgh's first river bridges, made of wood and long since replaced, opened in 1818 at Smithfield Street and 1819 at Sixth Street (then St. Clair Street). The city's oldest in-service bridge is the current Smithfield Street Bridge, which opened in 1883; it was designated a National Historic Landmark in 1976. Pittsburgh waged a massive road and bridge building campaign from 1924 to 1940; most of Pittsburgh's oldest major bridges date from this period. The coming of the Interstate Highway System triggered more construction in the second half of the twentieth century, as vehicular speed and throughput requirements increased. The result of more than 100 years of bridge building is a collection of most of the major types of bridge (suspension, cantilever, arch, etc.), mostly built from locally produced steel, including about forty river spans.

Many of the bridges in the Downtown area are colored Aztec Gold, either constructed as such or painted afterward, to match the city's official colors of black and gold. A few old and out-of-service bridges, such as the Hot Metal Bridge (which stood dormant until reopening as a passenger bridge in the year 2000), are exceptions to this rule.

This table lists all bridges crossing the Allegheny, Monongahela and Ohio rivers in the City of Pittsburgh limits.

This table lists some other major bridges within the City of Pittsburgh limits.

All content from Kiddle encyclopedia articles (including the article images and facts) can be freely used under Attribution-ShareAlike license, unless stated otherwise. Cite this article:
Bridges of Pittsburgh Facts for Kids. Kiddle Encyclopedia.