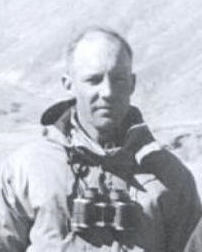 Brooke Dolan in 1942 near Lhasa before meeting with Tenzin Gyatso, the 14th Dalai Lama of Tibet

Brooke Dolan (second from left) and Ilya Tolstoy (right) with their monk-interpreter, Kusho Yonton Singhe, standing in front of a traditional Tibetan tent set up outside Lhasa for the expedition's official greeting ceremony

Brooke Dolan II (1908 – Chongqing, China, August 19 or 29, 1945) was an American adventurer and naturalist in the 1930s and 1940s. His father was Brooke Dolan, a wealthy American industrialist in Philadelphia. During World War II, he served as a lieutenant and captain.

All content from Kiddle encyclopedia articles (including the article images and facts) can be freely used under Attribution-ShareAlike license, unless stated otherwise. Cite this article:
Brooke Dolan II Facts for Kids. Kiddle Encyclopedia.