Calumet Township ( kal-yew-MET) is a charter township of Houghton County in the U.S. state of Michigan. The population was 6,489 at the 2010 census.

Calumet Township was organized in 1866.

Another village was known as Red Jacket, which existed as an incorporated village before 1929, in which year Laurium, Hecla, South Hecla and Red Jacket were combined. Calumet Township housed 60 saloons, 33 churches, 30 schools and five theatres.

The Wolverine Mine opened in 1882. Large-scale production began in 1890. The mine closed in 1925. The old Wolverine Mine is famous among mineral collectors for copper, silver, epidote, and quartz specimens. 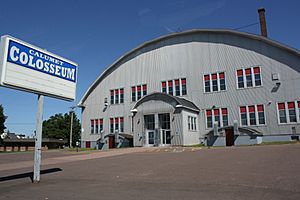 There were 2,892 households out of which 26.9% had children under the age of 18 living with them, 45.9% were married couples living together, 9.4% had a female householder with no husband present, and 41.3% were non-families. 37.3% of all households were made up of individuals and 18.2% had someone living alone who was 65 years of age or older. The average household size was 2.33 and the average family size was 3.14.

All content from Kiddle encyclopedia articles (including the article images and facts) can be freely used under Attribution-ShareAlike license, unless stated otherwise. Cite this article:
Calumet Township, Michigan Facts for Kids. Kiddle Encyclopedia.