Capitol Hill, locally nicknamed "the Hill," is a densely populated residential district in Seattle, Washington, United States. It is one of the city's most prominent nightlife and entertainment districts and is the center of the city's counterculture communities.

The Pike-Pine corridor (the area between Pike and Pine street from Boren Avenue through 15th Street is another main thoroughfare of the neighborhood, full of coffeeshops, bars, restaurants, and other food or music related businesses.

Panorama of Capitol Hill during blue hour as seen from the 40th floor of 1525 9th Ave. 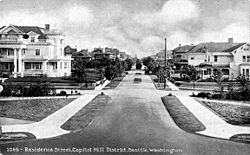 Circa 1900, Capitol Hill was known as 'Broadway Hill' after the neighborhood's main thoroughfare. The origin of the neighborhood's current name is disputed. According to one story, James A. Moore, the real estate developer who platted much of the area, named it thus in the hope that the Washington government would move to Seattle from Olympia. According to another, Moore named it after the Capitol Hill neighborhood of Denver, Colorado, his wife's hometown. It is thought by the editors of HistoryLink that the true story is a combination of the two.

Due to its one-time large Roman Catholic population, Capitol Hill was frequently referred to as Catholic Hill up until the 1980s.

Capitol Hill contains some of Seattle's wealthiest neighborhoods, including "Millionaire's Row" along 14th Avenue E. south of Volunteer Park (family residences on tree-lined streets) and the Harvard-Belmont Landmark District. It also has many distinguished apartment houses, including several by Fred Anhalt, as well as a few surviving Classical Revival complexes such as the Blackstone Apartments. However, the neighborhood's architecture did not fare so well in the decades immediately after World War II. Architect Victor Steinbrueck wrote in 1962 of the "tremendous growth of less-than-luxury apartments" that at first "appear to be consistent with the clean, direct approach associated with contemporary architecture" but whose "open outdoor corridors" totally defeat their "large 'view' windows" by giving occupants no privacy if they leave their blinds open to enjoy the view. "Most tenants close their blinds and look for another apartment when their lease runs out."

Bus transit service to and within Capitol Hill is provided by King County Metro, including electric trolleybus routes 10, 12, 43 and 49 of the Seattle trolleybus system. The First Hill Streetcar line, which opened in January 2016, terminates in the neighborhood.

The Capitol Hill station of Link Light Rail opened in March 2016, as part of the University Link extension. Sound Transit will select proposals for transit-oriented development above and around the station location at Broadway and John Street. 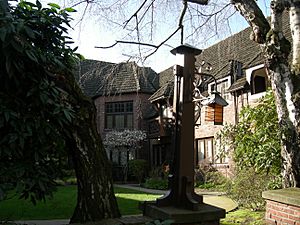 Capitol Hill has a reputation as a bastion of musical culture in Seattle and is the neighborhood most closely associated with the grunge scene from the early 1990s, although most of the best-known music venues of that era were actually located slightly outside the neighborhood. The music scene has transformed since those days and now a variety of genres (electronica, rock, punk, folk, salsa, hip hop and trance) are represented. 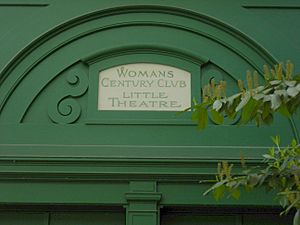 A club from a much earlier era: a sign over the rear door of the Harvard Exit Theatre recognizes the Woman's Century Club, founded in 1891; the club constructed the building in 1925 to serve as its clubhouse, and still meets there regularly.

The neighborhood figures prominently in nightlife and entertainment, with many bars hosting live music and with numerous fringe theatres. Most of the Hill's major thoroughfares are dotted with coffeehouses, taverns and bars, and residences cover the gamut from modest motel-like studio apartment buildings to some of the city's most historic mansions, with the two types sometimes shoulder-to-shoulder.

Capitol Hill is also home to two of the city's best-known movie theaters, both of which are part of the Landmark Theatres chain. Both theaters are architectural conversions of private meeting halls: the Harvard Exit (now closed permanently) in the former home of the Woman's Century Club (converted in the early 1970s) and the Egyptian Theatre, in a former Masonic lodge (converted in the mid-1980s). There is also Seattle's only cinematheque, the Northwest Film Forum, which in addition to screening films, teaches classes on filmmaking and produces film alongside Seattle's burgeoning filmmaking community. The Broadway Performance Hall, located on the campus of Seattle Central College (SCC), also hosts a variety of lectures, performances, and films. These theaters respectively host showings for the Seattle International Film Festival (SIFF) and the Seattle Lesbian & Gay Film Festival every year.

The Capitol Hill Arts District, a collaborative project between the Seattle Office of Arts & Culture, the Capitol Hill Housing Foundation, and the Capitol Hill Chamber of Commerce. It is the first arts district in Seattle and contains over 40 arts organizations, including galleries, retail stores, studios, performance venues, and more. 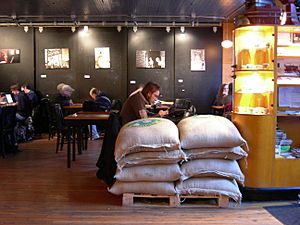 Stacks of coffee beans ready for roasting at Caffé Vita

Besides the large Seattle-based chains—Starbucks, Seattle's Best Coffee (now owned by Starbucks), and Tully's Coffee—Capitol Hill has been home to some of the city's most prominent locally owned coffeehouses. The neighborhood is considered a test market for coffee houses by Starbucks Corporation, which placed two stealth Starbucks stores on Capitol Hill in 2009 and 2011. 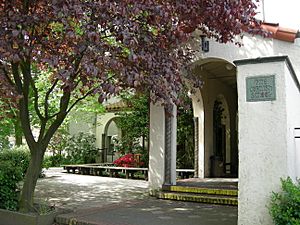 Kerry Hall is the original building of the Cornish School and now the last piece of the Cornish College of the Arts remaining on the Hill (the rest is now in the Denny Triangle).

In addition to Volunteer Park, parks on the Hill include the exquisite fountain and lawn themed Cal Anderson Park, Louisa Boren Park, Interlaken Park, Roanoke Park, and Thomas Street Park. Lake View Cemetery, containing the graves of Bruce Lee and his son Brandon Lee, lies directly north of Volunteer Park, and the Grand Army of the Republic Cemetery north of it in turn. 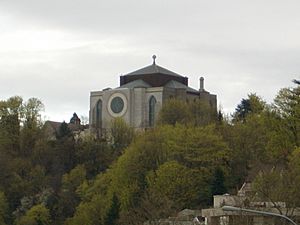 The oldest African-American church in Seattle is located on 14th Avenue, between E. Pike and E. Pine streets. The First African Methodist Episcopal Church was originally incorporated in 1891 as the Jones Street Church (when 14th Avenue was called Jones Street). The church was constructed in 1912, replacing the large house where congregations were previously held on the same site. It was designated as a Seattle landmark in 1984.

The First Methodist Protestant Church of Seattle, listed on the National Register of Historic Places, was remodeled and is now occupied by a design and marketing firm.

There is one Jewish synagogue near Capitol Hill. Temple De Hirsch Sinai, whose Alhadeff Sanctuary was designed by B. Marcus Priteca, among others, is just south of Madison Street, placing it technically in the Central District.

All content from Kiddle encyclopedia articles (including the article images and facts) can be freely used under Attribution-ShareAlike license, unless stated otherwise. Cite this article:
Capitol Hill (Seattle) Facts for Kids. Kiddle Encyclopedia.