Carlton Hill Station opened in 1888 on Jackson Avenue and namesake Erie Avenue in Rutherford. The station was served by the main line until 1963, when the Passaic Plan was undertaken, removing tracks at Passaic Park, Passaic, Clifton, and Lake View stations. At that point, the nearby drawbridge was permanently swung open and later removed, leaving a branch to Carlton Hill. For the next few years, Carlton Hill received deadhead trains and a rare Carlton Hill – Rutherford – Hoboken Terminal train schedule. In 1966, when several underused branches, including the Carlton Hill, lost service, the old main line alignment to Carlton Hill was abandoned. The tracks remain, though the building is gone.

Carlton Hill Station was situated at the intersection with Jackson Avenue in Rutherford, where the Erie Railroad's main line crossed, 10.75 miles (17.30 km) away from New York City's Chambers Street Ferry Terminal. The main line crossed through Carlton Hill on two tracks, separated by inter-track fencing. There was one main line platform, next to the station depot, which was located on the eastbound side of the tracks. During the morning commuter rush, Carlton Hill was full of commuters heading for New York City. After the commuter rush, a station agent's work was to inspect the yard and complete freight billing for the Royce Chemical Company. The yard commonly had boxcars, empty and loaded waiting for pick-up. Although the station no longer gets use, the former site is accessible via New Jersey Transit's buses #160 and #190 along with a walk down to Jackson Avenue. The former station site and trackage are owned by Norfolk Southern Railway.

Carlton Hill station was first constructed in 1888 as a 57-by-16-foot (17.4 m × 4.9 m) wooden structure at Jackson Avenue in Rutherford. The wooden station was the common design for station depots used by the Erie Railroad, designated Type IV. In 1889, upon opening of the station, formerly called West Rutherford, the station received eighteen trains from New York City and Jersey City daily, seventeen to New York City daily, and ten fewer trips on weekend each. The fare to get to Carlton Hill from Jersey City was $0.35 for one-way tickets, and $0.50 for round trips. The Erie's "Family Commutation Service", which was 50 trips, cost the rider $8.75.

On September 6, 1911, a woman named Elizabeth King was struck and killed by an Erie Railroad passenger train at Carlton Hill. The woman, heading to Passaic to visit her daughter in the local hospital for an operation, was of poor eyesight and was unable to see the train. At the time, the Erie had not implemented intertrack fencing, but the intersection with Jackson Avenue had been given flashing lights and bells to signify the oncoming train. After the incident, the New Jersey State Legislature got involved with the case and gave the Erie suggestions to add intertrack fencing at Carlton Hill to prevent another such incident. 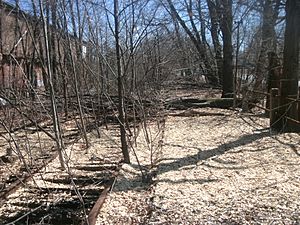 Carlton Hill station in March 2011, 46 years after the station closed. The partially overgrown tracks of the old Erie Railroad main line are visible along the deteriorating platform

During the 1950s and 1960s, several different priorities from different agencies around the cities of Paterson and Passaic were beginning to form. The Delaware, Lackawanna and Western, a competing railroad with the Erie, wanted to condense (along with the Erie) services and share trackage because of financial troubles. Secondly, the city officials in Passaic had first brought a proposal to the Erie asking about the removal of the main line through the city, which was tying up traffic in the city during station stops. This, however, was not implemented during the 1950s, as proposed. Instead, the Erie reconstructed the stations at Passaic and Clifton. Third, the New Jersey State Highway Department needed rights-of-way for Interstate 80 through Paterson and State Route 21 through Passaic (right where Passaic Park station and BE Drawbridge were located).

After the merge on October 17, 1960, between the Delaware, Lackawanna and Western and the Erie, the city officials in Passaic once again brought back the possibility of removing the tracks through Main Street, Passaic. This time, the newly formed Erie–Lackawanna went forward with it, beginning the process to move its main line onto the former Boonton Branch and Newark Branch through Lyndhurst, Passaic and Clifton. The main line was abandoned past Carlton Hill, and BE Drawbridge was swung in the open position, and soon put up for sale price of $0.00 in 1964 by the mayor of Passaic. 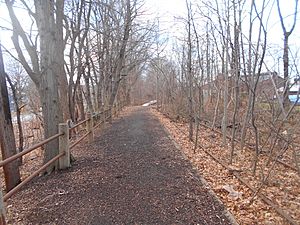 After the abandonment of the Erie Railroad's main line through the city of Passaic, the two-tracked stub from Rutherford and Bergen Junction westward through Carlton Hill remained in service as the Carlton Hill Branch. This alignment received most of the deadhead trains, but there was a limited set of Carlton Hill – Rutherford – Hoboken trains, making only those two stops. In October 1966, along with the Newark Branch and the spur of the New York & Greenwood Lake to Wanaque, the Carlton Hill Branch service was discontinued and the station no longer received passenger trains. The station building was later demolished, and only the tracks and asphalt platform remain to this date at Jackson Avenue. The company retains ownership.

All content from Kiddle encyclopedia articles (including the article images and facts) can be freely used under Attribution-ShareAlike license, unless stated otherwise. Cite this article:
Carlton Hill (Erie Railroad station) Facts for Kids. Kiddle Encyclopedia.