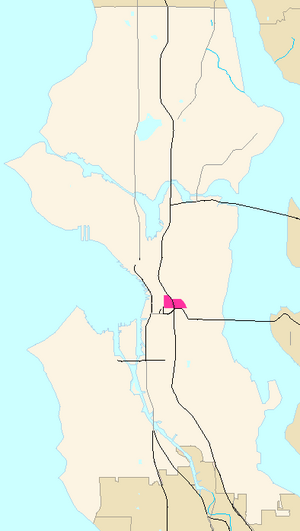 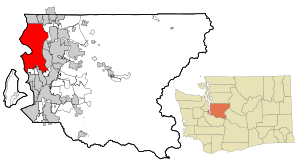 Location of Seattle within King County and the state. 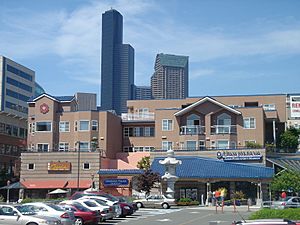 Boundaries of the CID are from 4th Avenue South to Rainier Avenue and from Yesler Way to Charles Street/Dearborn. The CID neighborhood stretches from Fourth Avenue S., beyond which are Pioneer Square and SoDo, east to Rainier Avenue South, beyond which is Rainier Valley. South of the Dearborn and Charles Street boundaries are Beacon Hill and the Industrial District; while north of Yesler Way, the northern boundary of the Chinatown International District, lies Downtown and First Hill.

Within the CID are the three neighborhoods of Chinatown, Japantown, and Little Saigon. The Seattle Chinatown Historic District, so designated by the U.S. National Register of Historic Places in 1986, is roughly south of Jackson and west of I-5, with Hing Hay Park at its heart. In the present day, Japantown is centered on 6th Avenue and Main Street and Little Saigon's main nexus is 12th Avenue South and South Jackson Street. 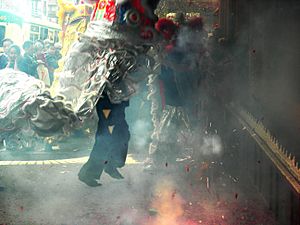 Chinese immigrants first came to the Pacific Northwest in the 1850s, and by the 1860s, some had settled in Seattle. Many of the first Chinese immigrants to Washington came from Guangdong province, especially Taishan. The first Chinese quarters were near Yesler's Mill on the waterfront. According to Chinese oral history, the waterfront was the first Chinatown, where the Chinese dock workers lived. In 1886 whites drove out most of Seattle's Chinese population. However, some took shelter with Native Americans on the reservations while others came under the protection of white employers and a judge. The Great Seattle Fire of 1889 further hindered the community. Eventually, the Chinese re-established new quarters farther inland, along Washington St. and Second Avenue South. This was the second Chinatown. Land values rose, especially with impending construction of the Smith Tower, and the people of Chinatown moved again, to the present and third location along King Street. Only the Hop Sing Tong managed to retain its building on 2nd and Washington. It sold this building about 2006 in order to purchase the former China Gate building in the current Chinatown.

Near the end of the 19th century, Japanese immigrants also began arriving, settling on the south side of the district on the other side of the railroad tracks. Part of present-day Dearborn Street, between 8th and 12th avenues, was known as Mikado Street, after the Japanese word for "emperor." Japanese Americans developed Nihonmachi, or Japantown, on Main Street, two blocks north of King Street. By the mid-1920s, Nihonmachi extended from 4th Avenue along Main to 7th Avenue, with clusters of businesses along Jackson, King, Weller, Lane, and Dearborn streets. 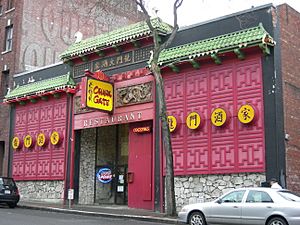 As downtown property values rose, the Chinese were forced to other areas. By the early 1900s, a new Chinatown began to develop along King Street. In 1910, Goon Dip, a prominent businessman in Seattle's Chinese American community, led a group of Chinese Americans to form the Kong Yick Investment Company, a benefit society. Their funding and efforts led to the construction of two buildings—the East Kong Yick Building and the West Kong Yick Building. Meanwhile, Filipino Americans began arriving to replace the Chinese dock workers, who had moved inland. According to Pamana I, a history of Filipino Americans in Seattle, they settled along First Hill and the hotels and boarding houses of Chinatown and Japantown beginning in the early 1920s. They were attracted to work as contract laborers in agriculture and salmon canneries. Among them was Filipino author Carlos Bulosan, who wrote of his experiences and those of his countrymen in his novel America Is In The Heart (1946).

In 1942 the federal government forcibly removed and detained people of Japanese ancestry from Seattle and the West Coast in the wake of the attack on Pearl Harbor. Authorities moved them to inland internment camps, where they lived from 1942 to 1946. Most of Seattle's Japanese residents were sent to Minidoka in Idaho. After the war, many returned to the Pacific Northwest but relocated to the suburbs or other districts in Seattle. A remaining vestige of the old community is the office of the North American Post, a Japanese-language newspaper founded in 1902. Another is the Panama Hotel, which was proclaimed a National Treasure in 2015 with a prior listing on the U.S. National Register of Historic Places. Uwajimaya, originally a Japantown store, moved down the hill into Chinatown.

African Americans moved to Seattle in the Great Migration, mostly out of the South, to work in the war industry during World War II, occupying many of the houses left vacant by the internment of the Japanese Americans. They filled the empty businesses along Jackson Street with notable jazz clubs.

In 1951, Seattle Mayor William D. Devin proclaimed the area "International Center" because of the diversity of people who resided and worked in the vicinity. Businesswoman and later city councilwoman Ruby Chow and others criticized the use of "international" for masking Chinese American history. The use of "International District" by the city remains controversial.

Seattle's first neighborhood advocacy group, the Jackson Street Community Council, opposed the construction of an interstate highway through the area. Despite protest, many Chinese and Japanese buildings and businesses were destroyed for the construction of Interstate 5 in the 1960s. Ethnic Asians formed new civic organizations (as compared to the traditional Chinese family associations, tongs and social clubs) serve needs ranging from community health, care of the elderly, information and referrals, counseling, historic preservation, marketing of the area, and building low-income housing.

In 1975 with the fall of Saigon, a new wave of immigrants from Vietnam and Southeast Asia established Seattle's Little Saigon east of I-5. Many of these immigrants were of Chinese descent. Viet Wah became Little Saigon's anchor store in 1981, and the famous boat-shaped restaurant Pho Bac introduced Vietnamese pho to the city in 1982. 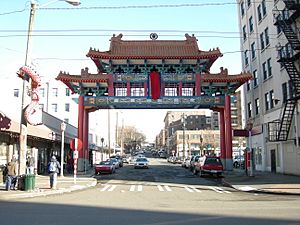 In 1986, a portion of Chinatown and Japantown was listed on the National Register of Historic Places as the "Seattle Chinatown Historic District." That year the Wing Luke Memorial Museum moved to 7th Avenue, a location it would occupy for two decades.

In 1999, the City Council approved the "Chinatown-International District Urban Village Strategic Plan" for the future of the neighborhood. This plan, agreed to by all major organizations in the CID, led to City Ordinance 119297. This ordinance enshrined the three neighborhoods of Chinatown, Japantown, Little Saigon and the Chinatown Historic District into one larger neighborhood with a compromised name. Since then, the often conflicting interests of development, preservation and the conversion of old buildings to low-income housing have clashed as office developments (e.g., Union Station) and market-rate housing developments are overwhelmed by drastic increases in low-income housing stock. In addition, controversy erupted over vacating S. Lane Street as part of a large redevelopment by the private business Uwajimaya. Protesters formed the Save Lane Street organization and insisted as business owners they supported re-development, but opposed vacating a public street for a private business use. After losing a lawsuit filed over the matter, the Save Lane Street group dissolved.

Construction on a paifang for the neighborhood began in 2006 and the Historic Chinatown Gate was unveiled on February 9, 2008. It stands at the west end of Jackson Street. It is 45 feet tall and made from steel and plaster.

The Wing Luke Museum moved to its present location in the East Kong Yick Building in 2008.

Certain neighborhood buildings in Seattle's Chinatown incorporate Chinese architectural designs such as balconies for on the second or third floors or tile roofs. The neighborhood also has public art installations by artists such as George Tsutakawa and Norie Sato. Artists Meng Huang and Heather Presler installed Chinese dragon sculptures on lampposts along Jackson Street in 2002.

Notable businesses and landmarks include:

All content from Kiddle encyclopedia articles (including the article images and facts) can be freely used under Attribution-ShareAlike license, unless stated otherwise. Cite this article:
Chinatown-International District, Seattle Facts for Kids. Kiddle Encyclopedia.