Christianity and alcohol facts for kids 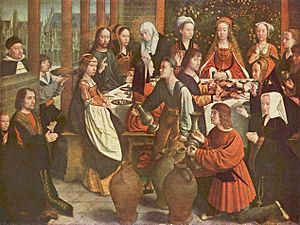 Jesus making wine from water at a wedding

Christianity and its beliefs about alcohol have changed since Christianity was started about 2,000 years ago.

Wine has always been important in Christianity. Christians believe that Jesus turned water into wine at a wedding where there was not enough to drink (see the picture at the right).

The Bible says that wine was also important at the Last Supper - the last time Jesus ate with his disciples before he was arrested. The Bible's Gospel of Matthew 26:27 says that Jesus held up a cup of wine and told all of his disciples:

"Take this [cup] all of you and drink from it. This is the cup of my blood ... My blood will be shed for you and for all so that sins may be forgiven."

Since that time, Roman Catholic church services have always included something called the Eucharist (also called "Holy Communion"). A priest holds up a cup of wine and says a prayer. At that point, Catholics believe the wine is turned into Jesus's blood. They believe drinking the wine is a way of remembering that Jesus was willing to die so their sins would be forgiven.

In the first 1,800 years of church history, Christians often enjoyed alcoholic drinks as a part of their everyday life. At church, during the Eucharist, they almost always used wine.

Early Christians believed the Bible and Christian tradition both said alcohol is a gift from God. They taught that this gift made life happier, but that drinking too much alcohol and becoming drunk was a sin.

In the early 1500s, the Protestant Church split off from the Roman Catholic Church. Over time, these two Christian churches started to believe some different things.

Today, there are many different types of Christianity, with many different beliefs. Most people still believe in the traditional position: that drinking some wine is all right, just not too much. Most Christians' opinions about alcohol depend on how they understand what the Bible says about it.

Alcohol in the Bible

The Bible often mentions alcoholic drinks. Sometimes it talks about real wine. Other times, it uses the word "wine" to mean something else.

The Bible says that alcohol is a blessing from God that makes people happy, but it can also be dangerously and sinfully used.

The Bible uses a few different words for alcoholic drinks. Though prohibitionists and some abstentionists disagree, most people agree that the words were usually meant to be about intoxicating drinks (drinks that can make a person drunk).

All content from Kiddle encyclopedia articles (including the article images and facts) can be freely used under Attribution-ShareAlike license, unless stated otherwise. Cite this article:
Christianity and alcohol Facts for Kids. Kiddle Encyclopedia.