Map of the region.

Miners pose with lunch pails in hand on a mine rock pile outside of the Tamarack mineshaft. This mine was one of the most productive mines in the Copper Country.

The Copper Country is an area in the Upper Peninsula of Michigan in the United States, including Keweenaw County, Michigan, Houghton, Baraga and Ontonagon counties as well as part of Marquette County. The area is so named as copper mining was prevalent there from 1845 until the late 1960s, with one mine (the White Pine mine) continuing through 1995. In its heyday in the latter half of the 19th century and the early 20th century, the area was the world's greatest producer of copper. 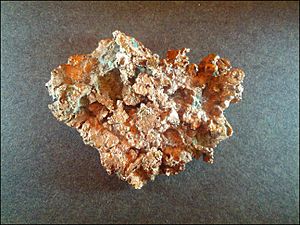 Native Americans mined copper from small pits as early as 3000 B.C. on this peninsula surrounded by the waters of Lake Superior.

Douglass Houghton, the State Geologist of Michigan in the mid 1800s and later to become mayor of Detroit, reported on the copper deposits in 1841. The first successful copper mine, the Cliff mine, began operations in 1845, and spurred by venture capital from Boston and other East Coast investors, many other mines quickly followed. Mining of the most productive deposit, the Calumet conglomerate, began in 1865. Mining took place along a belt that stretched about 100 miles southwest to northeast.

While mining continues on a small scale, tourism and logging are now the area's major industries.

Initially, Irish, Cornish, French-Canadian and German immigrants came to mine copper on the peninsula. They were followed by large numbers of Finns, Swedes, Danes, Sámi and Norwegians who immigrated to the Upper Peninsula, especially the Keweenaw Peninsula, to work in the mines. The immigration of people from Finland peaked from 1899 to World War I. Slovenes, Croatians, and Italians emigrated from about 1880, the first two groups sometimes called Austrians as their homelands were then part of the Austrian Empire. Polish people also were attracted to this successful mining area. Thus the pattern in this boom period was first the native Americans and people from the British Isles, French Canada and Western Europe, followed by people from the Nordic countries, and then by people from Southern and Eastern Europe. The Finns in particular stayed on and prospered even after the copper mines closed, while most moved on to other mining areas or homesteaded in other Midwestern states.

After the copper mining

Popular tourist destinations include the cities of Copper Harbor and Houghton, and the Porcupine Mountains with Lake of the Clouds. Snowmobiling is very popular in the winter, and snowmobile trails are found in most areas.

The Copper Country is largely rural, and much of it has been designated as state parks or similar designations. These include McLain State Park, Porcupine Mountains State Park, and the Copper Country State Forest. The Keweenaw National Historical Park includes several important sites relating to the area's copper-mining history.

All content from Kiddle encyclopedia articles (including the article images and facts) can be freely used under Attribution-ShareAlike license, unless stated otherwise. Cite this article:
Copper Country Facts for Kids. Kiddle Encyclopedia.