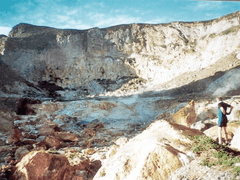 Lieutenant John Watts, RN was the first European to visit the Macauley and Curtis Islands — which he named after patrons George Mackenzie Macaulay and William Curtis — on the Lady Penrhyn in late 1788. Lady Penryn had delivered convicts to New South Wales as part of the First Fleet and was proceeding to Macao.

Count von Luckner, Commander of the German raider Seeadler during the First World War, stopped off at Curtis Island to replenish his stores from the castaway depot left there by the New Zealand Marine Department (for the use of shipwrecked crews) while attempting to make good his escape from New Zealand to South America.

All content from Kiddle encyclopedia articles (including the article images and facts) can be freely used under Attribution-ShareAlike license, unless stated otherwise. Cite this article:
Curtis Island, New Zealand Facts for Kids. Kiddle Encyclopedia.