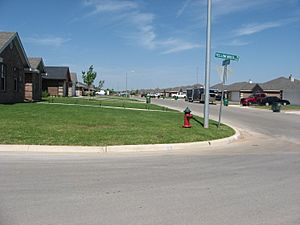 Within the last few years, Abilene, Texas, has steadily become the retail, residential, business, medical, and overall center of the surrounding Big Country. Commercial development was especially boosted in 2007, with several multimillion dollar projects throughout the entire city. Most of the recent development is concentrated in roughly four areas in Abilene: Southwest Drive, Catclaw Drive, and Buffalo Gap Road near the Winters Freeway to the southwest, as this area becomes a strong commercial sector as well as a good residential district; Buffalo Gap Road, Beltway South, and US Highway 83/84 near and beyond the outskirts of the city in the south with several housing developments; Loop 322 area and Oldham Ln to the southeast, also near and past the edge of the city with a mix of several residential subdivisions as well as the start of commercial growth; and State Highway 351/Ambler Avenue near Interstate 20 to the northeast, also a combination of staple retail development, similar to the southwest commercial development, and the beginnings of residential growth with a new apartment complex and growing subdivisions. All this growth has contributed to the suburbanization of the city; however, as Abilene is not a large city itself, this is also helped the urbanization of the city as a whole. More people in the city leads to more workers and commuters in a city that has a short commute time throughout the city.

Much of Abilene's commercial and retail growth is concentrated in two opposite areas of the city. In the southwest area of the city, along and near Southwest Drive, Ridgemont Drive, and Buffalo Gap Road, several new retailers and businesses have brought new names to Abilene as this area continues to attract many to new shops, hotels, and restaurants. In addition, even some new residential projects have sprouted throughout the southwest side of the city, many of which are within blocks of Rebecca Lane.

Construction on several arterial and connective streets is indicative of the area's strong commercial growth. Southwest Drive was widened from 2 lanes each direction (plus central left-turn lane) to 3 lanes each direction, totaling 7 lanes from Catclaw Drive to S. Clack Street and 6 lanes under the Winters Freeway. This project was completed in late 2008. Also, Catclaw Drive was reconstructed and reconfigured to create 2 northbound lanes, 1 southbound lane, and 1 shared left-turn lane. The frontage roads of the Winters Freeway, S. Clack Street and S. Danville Drive, were reconstructed from S. 14th St to the US 83/84 & Loop 322 interchange, with restriping and minor widening done between Southwest Drive and Buffalo Gap Road from 2 lanes each to 3 lanes each.

Southwest Drive and Catclaw Drive have become the source of multiple new businesses, many of which are national chains with their first Abilene location. Two new shopping centers have been created in the area since 2005, Shops at Abilene and Abilene Marketplace, though the latter currently only has one tenant. Also, Buffalo Gap Road and Ridgemont Drive have been a constant area for retail and business and still continues to develop. Here the Mall of Abilene has been a strong spur for commerce since the 1980s, after it was constructed in 1979. Contained is a list of several new businesses brought to this commercial district since the turn of the century.

The following four hotels are all located on a short stretch of Catclaw Drive north of Southwest Drive.

Along the edge of the city and beyond city limits, several new subdivisions have come to fruition in only the last few years. South of Antilley Road, these subdivisions mainly use two routes to enter the city, Buffalo Gap Road and US Highway 83/84, where many of these places are located. This surge of residential growth is evidence of both recent outward growth in the city and the desire for open spaces often exhibited by urbanites as well as suburbanites.

The following subdivisions are located outside of the city limits.

In commercial development, the southeast area of Abilene, around Loop 322, is likely "ranked third in the city" for development. Currently, all that exists is a family entertainment center, a small local shopping center, a restaurant, and a new gas station. Albeit, that could easily change in near future with the area possibly on the move towards self-sustainability. The area is definitely a leading source of residential development. Several subdivisions have broken ground around the Loop area and along Oldham Lane/FM 1750. As business develops in the area, the southeast region could become analogous to the southwest area, but today the region is only in its initial stages.

Though only a few new businesses are in the southeast area outside of Loop 322, the area does show promise for future growth. With housing construction on the rise, the region proves to be a good market for residential necessity businesses such as grocery and home improvement stores or possibly restaurants. Currently, however, there exist a unique collection of various local businesses and very few, if any, chain stores.

Along State Highway 351 outside of I-20 and along the interstate to the west, the northeast region of Abilene technically started development in the mid-1980s when the Heritage Parks subdivision first broke ground. However, after the turn of the 21st century, construction accelerated rapidly for the area to become the second strongest area of development in the city. Since 2005, the Heritage Parks subdivision has expanded; a new community and apartment complex have begun; a Wal-Mart has been attracted to the area, enticing more commercial growth, and a new master-planned commercial district has been created by a major developer, Kenneth Musgrave, who owned, and still owns, much of the land in the area along SH 351.

All content from Kiddle encyclopedia articles (including the article images and facts) can be freely used under Attribution-ShareAlike license, unless stated otherwise. Cite this article:
Developments in Abilene, Texas Facts for Kids. Kiddle Encyclopedia.