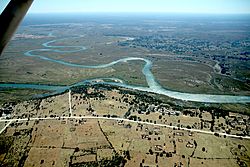 In ecology, edge effects are changes in population or community structures that occur at the border of two or more places of living. As the edge effects get bigger, there is greater biodiversity in the habitat at the border.

Height can create borders between patches as well.

Some plants and animals can be active on habitat borders because of environmental conditions. Larger patches allow more individuals and biodiversity becomes bigger. When the plants get more light, there are more types and different sizes. After it is possible to live for herbivorous insects, then birds some bigger animals.

There are three important factors:

Human activity creates edges through development and agriculture. Often, the changes are harmful to the size of the habitat and to species. Examples of human impacts:

All content from Kiddle encyclopedia articles (including the article images and facts) can be freely used under Attribution-ShareAlike license, unless stated otherwise. Cite this article:
Edge effects (ecology) Facts for Kids. Kiddle Encyclopedia.