El Sobrante (Spanish for "surplus" or "remaining land"; Spanish:) is a census-designated place (CDP) in Contra Costa County, California, United States. The population was 12,669 at the 2010 census.

According to the United States Census Bureau, the CDP has a total area of 2.8 square miles (7 km2), all of it land.

Between 5000 and 1000 BC, an indigenous tribe of people called the Huichin, an Ohlone people, came to the East Bay, including El Sobrante. One of the Huichin villages was located where the El Sobrante Library now stands. The Huichin left a now-buried shell mound beside San Pablo Creek.

Between November 1794 and May 1795, the Huichin were forcibly converted to Christianity by Spanish missionaries. After all of the Huichin were removed to Mission San Francisco, they suffered an epidemic of European diseases as well as food shortages, and died in great numbers, resulting in alarming statistics of death and escapes from the missions. In pursuing the runaways, the Franciscans sent neophytes first and (as a last resort) soldiers to go round up the runaway "Christians" from their relatives, and bring them back to the missions. Thus illness spread both inside and outside of the missions.

After Mexican independence from Spain in the early 19th century, Spanish colonists were given land grants, one of which was Rancho El Sobrante, deeded to Juan Jose and Víctor Castro in 1841. The grant's boundaries were unusually complicated, as they were to be determined by the boundaries of the surrounding grants: San Antonio, San Pablo, El Pinole, Boca de la Cañada del Pinole, Acalanes, and La Laguna de los Palos Colorados. In this sense, the rancho was el sobrante, the remaining area. Legal disputes concerning the borders and the claims of squatters continued for four decades, with much of the land sold to pay court and attorney costs. Victor Castro was left with 549 acres (2.22 km2) of the original grant. He built an adobe dwelling in what is now El Cerrito, and became one of the first members of the Board of Supervisors of Contra Costa County. Castro died at the age of 90 in 1897. Some of his descendants still live in the area of Castro Ranch Road.

El Sobrante was called "Oak Grove" by industrial concerns in 1887 when the California and Nevada Railroad put a spur into the area for the purpose of carrying lumber cut from the hills. Then the name Sobrante was applied, with the addition of the Spanish definite article "El" coinciding with the opening of the first post office in 1941.

By the early 20th century, Rancho El Sobrante had been reduced to a number of smaller ranches, generally following a dirt road along San Pablo Creek. Many of these ranches were further subdivided. As roads were paved and homes were constructed, El Sobrante changed from a rural to a semi-rural community. 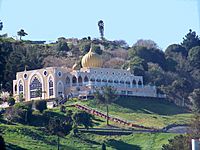 El Sobrante is home to a growing Sikh population. The center of the Sikh community is the Gurdwara Sahib of El Sobrante.

There were 4,676 households, out of which 32.6% had children under the age of 18 living with them, 47.6% were married couples living together, 14.8% had a female householder with no husband present, and 32.2% were non-families. 24.6% of all households were made up of individuals and 8.3% had someone living alone who was 65 years of age or older. The average household size was 2.61 and the average family size was 3.11.

El Sobrante is also home to a growing Sikh population. The center of the Sikh community is the Gurdwara Sahib of El Sobrante (known for its large golden dome) which sits high in the hills above San Pablo Dam Road.

According to Les Claypool on his 1996 song El Sobrante Fortnight, the

All content from Kiddle encyclopedia articles (including the article images and facts) can be freely used under Attribution-ShareAlike license, unless stated otherwise. Cite this article:
El Sobrante, California Facts for Kids. Kiddle Encyclopedia.