Esperanto uses grammar and words from many natural languages, such as Latin, Russian, and French. Morphemes in Esperanto (the smallest parts of a word that can have a meaning) cannot be changed and people can combine them into many different words. The language has got common attributes with isolating languages (they use word order to change the meaning of a sentence) such as Chinese, while the inner structure of Esperanto words has got common attributes with agglutinative languages (they use affixes to change the meaning of a word), such as Turkish, Swahili and Japanese. 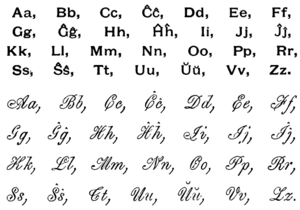 The Esperanto alphabet is based on the Latin script. It has six letters with diacritics: ĉ, ĝ, ĥ, ĵ, ŝ (with circumflex), and ŭ (with breve). The alphabet does not have the letters q, w, x, or y.

The 28-letter alphabet is:

Even the world uses the Unicode, the letters with diacritics (found in the "Latin-Extended A" section of the Unicode Standard) can cause problems with printing and computing, because they are not found on the keyboards we use.

There are computer keyboards that support the Esperanto alphabet, for example, Amiketo for Microsoft Windows, Mac OS X, and Linux, Esperanta Klavaro for Windows Phone, and Gboard & AnySoftKeyboard for Android. 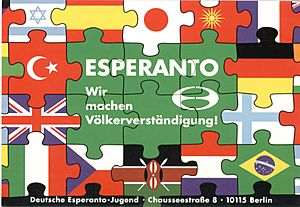 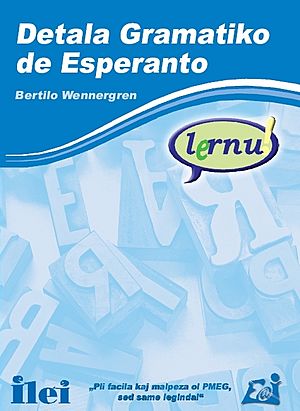 Cover of the book Detala Gramatiko de Esperanto ("Detail grammar of Esperanto") by Bertilo Wennergren, a member of the Academy of Esperanto.

Esperanto's grammar (rules of language) is meant to be simple. The rules in Esperanto never change and can always be applied in the same way.

The -n ending is the mark of the direct object (the Accusative case) in nouns and adjectives. For example:

In adjectives and adverbs is comparison made by words pli (more) and plej (most). For example:

So, to say how old somebody is in Esperanto, just say:

Esperanto has got regular endings for these grammatical tenses:
-is – past tense
-as – present tense
-os – future tense

Verbs end with -as when they are in present tense. English uses I am, you are, he is. But in Esperanto, there is just one word for am, are, is - estas. Similarly, kuras can mean run or runs. Infinitives end with -i. For example, esti means to be, povi means to can. It is easy to make past tense - always add -is ending. To make future tense, add -os. For example:

Many words can be made opposite by adding mal at the beginning.

Examples of sentences which show the rules:

To make a yes-or-no question, add Ĉu at the beginning. For example:

Unlike in English, they can answer to a yes/no question only jes (yes) or ne (no).

Esperanto has over 20 special words which can change the meaning of another word. People put them before or after the root of a word.

These words combined can make very long words, such as malmultekosta (cheap), vendredviandmanĝmalpermeso (prohibition of eating a meat on Friday).

Prefixes are added before the root of the word.

Suffixes are added after the root of the word, but before the ending.

All content from Kiddle encyclopedia articles (including the article images and facts) can be freely used under Attribution-ShareAlike license, unless stated otherwise. Cite this article:
Esperanto language structure Facts for Kids. Kiddle Encyclopedia.