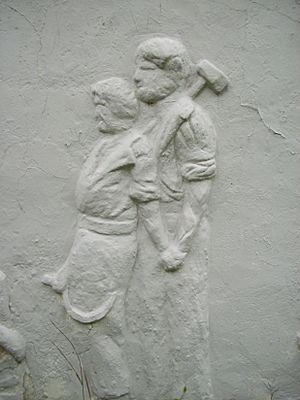 Stucco relief from the Sam Goldman house in the Ferrer Colony

The Ferrer Colony and the associated Ferrer Modern School was an anarchist intentional community. It was founded in 1911 in Manhattan in New York City and in 1915 it moved to Piscataway, New Jersey. It lasted for more than 40 years before disbanding in 1953.

The colony was founded in 1911 in the borough of Manhattan in New York City. In 1915 it moved to Piscataway, New Jersey. The Ferrer Modern School opened later. The project was named after Francesc Ferrer i Guàrdia, an educator, activist and anarchist who founded the Modern School movement in Spain. The intentional community was run by consensus decision-making. Inhabitants were free to leave or join, with no questions asked. It gained a reputation for being a center of the free love movement, which drew in new inhabitants.

The colony purchased farmland for about $100 a plot. The plot was then sold to a community member for $150. By 1922, at their peak, 90 homes had been established. Some of the homes were only lived in during the weekend because people commuted to work in New York City.

During the World War II the U.S. Government bought the surrounding land, and the buildings that were only occupied sporadically were subject to theft and vandalism. Parents then stopped sending their children to the school. Between 1955 and 1958, the assets of the school were sold off. The Ferrer Colony and Modern School disbanded in 1953.

The Ferrer School was originally at 103 East 107th Street in New York, and housed children of strikers from the 1912 Lawrence textile strike and 1913 Paterson silk strike.

Samuel Goldman (1882-1969) began building the Russian House in the Modern School colony in 1915. The building was added to the New Jersey Register of Historic Places and the National Register of Historic Places in 2010. This house is significant as the remaining building most evocative of the colony, and for the Goldman-designed sculptures and bas-reliefs on the building's facades.

All content from Kiddle encyclopedia articles (including the article images and facts) can be freely used under Attribution-ShareAlike license, unless stated otherwise. Cite this article:
Ferrer Colony and Ferrer Modern School Facts for Kids. Kiddle Encyclopedia.