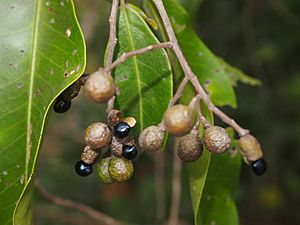 Geijera salicifolia, commonly known as glasswood, green satinheart or scrub wilga, is a species of shrub or tree in the family Rutaceae and is native to Australia, New Guinea and New Caledonia. It has narrow elliptic to egg-shaped leaves, small white flowers in loose groups and oval to more or less spherical fruit, each containing a shiny black seed.

Glasswood grows in rainforest, including dry rainforest, and woodland from sea level to an altitude of 880 m (2,890 ft) and occurs in New Guniea, New Caledonia and Australia. In Australia it is found from Coen in Queensland south to the Budderoo National Park in New South Wales and west to the north-east of the Northern Territory.

All content from Kiddle encyclopedia articles (including the article images and facts) can be freely used under Attribution-ShareAlike license, unless stated otherwise. Cite this article:
Geijera salicifolia Facts for Kids. Kiddle Encyclopedia.