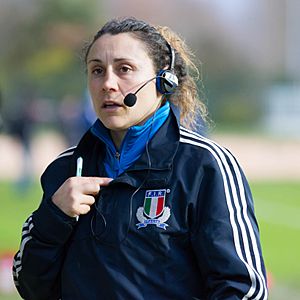 Giuliana Campanella (born 4 November 1976 Messina) is an Italian rugby union player, rugby coach, and sports manager. She played in 59 international matches and at two editions of the World Cup.

In April 1997, she made his international debut in Nice during the European championship in a victory against Ireland. She participated at the 1998 women's rugby world cup, and 2002 Women's Rugby World Cup.

At the club level, she played for Messina, and Colleferro Red & Blu.

She was women's team manager for the Italian national team, beginning with the 2014 Six Nations championship.

All content from Kiddle encyclopedia articles (including the article images and facts) can be freely used under Attribution-ShareAlike license, unless stated otherwise. Cite this article:
Giuliana Campanella Facts for Kids. Kiddle Encyclopedia.