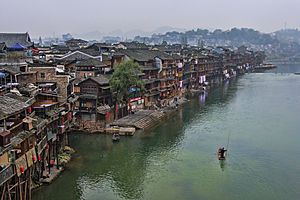 Hunan (Chinese: 湖南; pinyin: Húnán; ) is a province of South Central China, in the middle reaches of the Yangtze River and south of Lake Dongting (The characters in the name Hunan mean "lake" and "south"). Hunan is sometimes called 湘|湘 (pinyin: Xiāng) for short, after the Xiang River which runs through the province.

All content from Kiddle encyclopedia articles (including the article images and facts) can be freely used under Attribution-ShareAlike license, unless stated otherwise. Cite this article:
Hunan Facts for Kids. Kiddle Encyclopedia.