Jarryd Lee Hayne (born 15 February 1988) is an Australian professional rugby league footballer for the Parramatta Eels of the National Rugby League who has also played American football and rugby union sevens at the highest levels. An Australia and Fiji international and New South Wales State of Origin representative fullback or centre, he previously played for the Gold Coast Titans and the NRL All Stars team.

He won the Dally M Medal in 2009 and 2014 as the NRL's player of the year, and the Rugby League International Federation's International Player of the Year award in 2009. Hayne attracted significant attention when he made the switch from one of the NRL's top players to a rookie in the 2015 NFL season with the San Francisco 49ers. Before returning to the NRL, Hayne also represented Fiji in rugby union sevens. 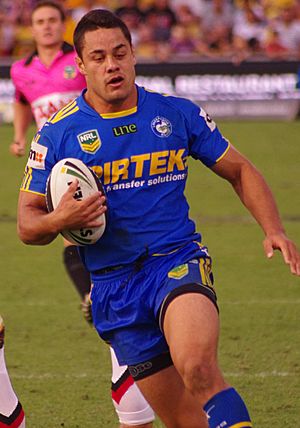 Hayne was born in Sydney, New South Wales, Australia on 15 February 1988. He is the son of a Fijian father, Manoa Thompson, and an Australian mother, Jodie. He has three siblings. His father played professional rugby league for South Sydney, Western Suburbs and the Auckland Warriors while also representing Fiji.

In early life Hayne took up athletics winning multiple titles. He still holds the under 8 and under 9 year old Public School Sports Association (PSSA) 100 metre records. He competed in Little Athletics until under 15 age group. He attended school at John Warby Public School, Leumeah High and Westfields Sports High School but dropped out of high school early to pursue a career in rugby league.

Hayne began playing junior rugby league for Campbelltown City, East Campbelltown and Cabramatta at the age of six. Hayne's 2009 season has been described as one of the greatest individual seasons in Australian rugby league history. 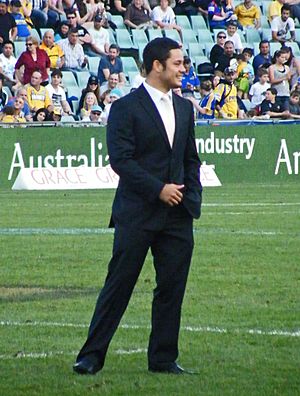 All content from Kiddle encyclopedia articles (including the article images and facts) can be freely used under Attribution-ShareAlike license, unless stated otherwise. Cite this article:
Jarryd Hayne Facts for Kids. Kiddle Encyclopedia.