Kwaak Taanba or Kwaak Jatra or Loidam Kumsaba (literally, "Crow freeing festival") is a traditional festival celebrated by the Meitei ethnicity, in which the King of Manipur sets a crow free from bondage. The event is observed in the 10th lunar day of the "Langban" month of the Meitei calendar (Manipuri calendar). The festival is accompanied with various ceremonial rites and rituals, music and dance performances in the Sana Konung, the Royal Residence of the royalties of Manipur.

A crow (kwaak) is set free from bondage 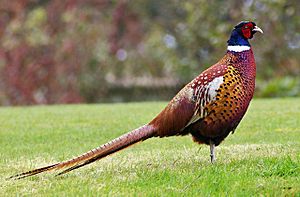 Historically, instead of crow, pheasant is set free.

All content from Kiddle encyclopedia articles (including the article images and facts) can be freely used under Attribution-ShareAlike license, unless stated otherwise. Cite this article:
Kwaak Taanba Facts for Kids. Kiddle Encyclopedia.