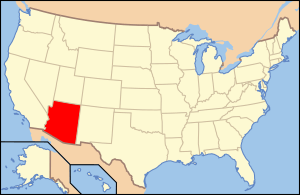 The following is a list of symbols of the U.S. state of Arizona. The majority of the items in the list are officially recognized after a law passed by the state legislature. Most of the symbols were adopted in the 20th century. The first symbol was the motto, which was made official in 1864 for the Arizona Territory. Arizona became the second state to adopt a "state firearm" after Utah adopted the Browning M1911.

All content from Kiddle encyclopedia articles (including the article images and facts) can be freely used under Attribution-ShareAlike license, unless stated otherwise. Cite this article:
List of Arizona state symbols Facts for Kids. Kiddle Encyclopedia.