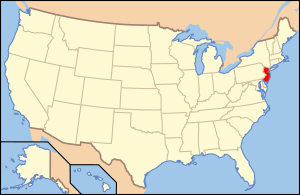 Location of the state of New Jersey in the United States

A decade-long campaign by a Haddon Township teacher led to the selection of Hadrosaurus foulkii as the official state fossil in June 1991. This example of the dinosaur was excavated in 1858 from a marl pit near Haddonfield as one of the most complete dinosaur skeletons to be reconstructed. It remains on display at the New Jersey State Museum, where it has been on display since 1931.

In what The New York Times described as a "food fight", Assemblymember Clare Farragher argued in 2003 that the tomato has a strong historical association with the Garden State and that "the Jersey tomato does have a unique taste" that derives from the characteristics of the soil on the Atlantic coast. Legislation ultimately passed in 2003 establishing the blueberry as New Jersey's official state fruit.

In online balloting, "New Jersey: Come See For Yourself" was selected by the 11,000 participants in 2006 as the winner, from a slogan originally submitted by a resident of Passaic, New Jersey. The Governor of New Jersey announced the new slogan in January 2006, after having previously rejected the slogan "We'll Win You Over", which had been developed by an advertising agency at the cost of $250,000 and was deemed to be "too negative and prone to ridicule". "Come See For Yourself" edged out second-place finisher "New Jersey: The Best Kept Secret" by approximately 100 votes.

On May 10, 2019 New Jersey became the second state in the United States to have an Official State Microbe, the bacterium Streptomyces griseus. 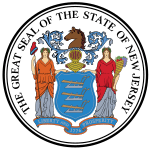 All content from Kiddle encyclopedia articles (including the article images and facts) can be freely used under Attribution-ShareAlike license, unless stated otherwise. Cite this article:
List of New Jersey state symbols Facts for Kids. Kiddle Encyclopedia.