An example of a low-carbohydrate dish, zucchini and ground beef 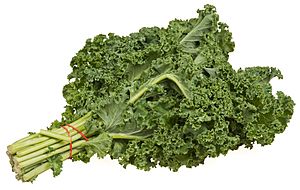 Like other leafy vegetables, curly kale is a food that is low in carbohydrates.

There is evidence that the quality is also important too, and that high-fiber slow-digesting foods are healthful while ultra-processed and sugary foods are less so. People choosing diet for health conditions should have the diet focused on their own needs.

Most vegetables are low- or moderate-carbohydrate foods. Some vegetables, such as potatoes, carrots, maize (corn) and rice are high in starch. Most low-carbohydrate diet plans encourage to eat vegetables such as broccoli, spinach, kale, lettuce, cucumbers, cauliflower, peppers and most green-leafy vegetables.

Grain products, such as bread are usually restricted in these diets.

In 1797, John Rollo reported on the results of treating two diabetic Army officers with a low-carbohydrate diet and medications. A very low-carbohydrate, ketogenic diet was the standard treatment for diabetes throughout the nineteenth century.

In 1863, William Banting, a formerly obese English undertaker and coffin maker, published "Letter on Corpulence Addressed to the Public," in which he described a diet for weight control giving up bread, butter, milk, sugar, beer, and potatoes. His booklet was widely read, so much so that some people used the term "Banting" for the activity now called "dieting."

In the early 1900s Frederick Madison Allen made a highly restrictive short term regime which was described by Walter R. Steiner at the 1916 annual convention of the Connecticut State Medical Society as The Starvation Treatment of Diabetes Mellitus. This diet was often administered in a hospital in order to better ensure following and safety.

All content from Kiddle encyclopedia articles (including the article images and facts) can be freely used under Attribution-ShareAlike license, unless stated otherwise. Cite this article:
Low-carbohydrate diet Facts for Kids. Kiddle Encyclopedia.