The Maschinengewehr 34, or MG 34, was a general-purpose machine gun. It was developed in Nazi Germany. It was first made and accepted in 1934. It was first given to soldiers in 1935. It fires the 7.92 x 57mm Mauser cartridge.

It was designed to be able to be a light machine gun and be able to do other things as well. This was an early example of a general-purpose machine gun. When it is being used as a light machine gun, a bipod can be attached to it. If it is being used for other things, it is put onto a tripod and is belt-fed. In a battle, the bipod version was used mostly. This turned the MG 34 into an infantry support weapon. Later, the MG 34 started to be used less for the MG 42.

The MG 34 was used as Germany's main machine gun in the 1930s. It stayed the main tank and anti-aircraft machine gun. It was supposed to be replaced by the MG 42. However, there were not enough MG 42s. The German Armed Forces still wanted the MG 34 to be made. It kept being made until the end of WWII in 1945. However, the German Armed Forces wanted more MG 34s than could be made.

The MG 34 was designed by Mauser Werke. It was based on the Solothurn 1930 (MG 30). The Solothurn was developed by Rheinmetall. It was starting to be used in Switzerland.

The MG 34 began being made right away. It was used in all parts of the German Armed Forces and even by the police. When it was first brought into service, it was the very first general-purpose machine gun. However, the MG 34 took a long time to make, and it was expensive and difficult to make. The Germans ended up using a weapon they could not afford. However, because so many were needed, it was still made.

Some MG 34s given to Chinese Nationalist forces were used during both World War II and the Chinese Civil War.

The MG 34 could use 7.9 mm cartridge from both magazines and belts.

The MG 34 broke easily if it was used in dirt or dust.

The MG 34 could be carried around by an infantry squad and be fired from a bipod. It could also be put onto a tripod to fire for a long time. It was kept cool by the air.

Soldiers from the German Großdeutschland regiment use an MG 34 on a tripod. 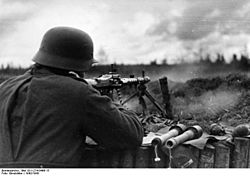 The MG 34 Panzerlauf was the standard machine gun for tanks during World War II. To be used in a tank, the barrel of the MG 34 was covered with armour and the butt stock was removed.

The MG 81 machine gun was based on the MG 34. The MG 81 was used on aircraft. It got its ammunition from a belt and fired 7.9 mm rounds. There were never enough MG 34s made to make its users happpy. Even though the MG 81 was much better than the MG 15 and MG 17 used before it, they were still used until the end of the war.

All content from Kiddle encyclopedia articles (including the article images and facts) can be freely used under Attribution-ShareAlike license, unless stated otherwise. Cite this article:
MG 34 Facts for Kids. Kiddle Encyclopedia.