Manawatu-Wanganui is a region in the lower half of the North Island of New Zealand, whose main population centres are the cities of Palmerston North and Whanganui. It is administered by the Manawatu-Wanganui Regional Council, which for trading purposes is known as Horizons Regional Council. Although in recent years both the Whanganui River and Whanganui District have been renamed, the region is currently spelled without an "h".

The region is dominated and defined by two significant river catchments, the Whanganui and the Manawatu. The Whanganui River, in the northwest, is the longest navigable river in New Zealand. The river was extremely important to early Māori as it was the southern link in a chain of waterways that spanned almost two-thirds of the North Island. It was one of the chief areas of Māori settlement with its easily fortified cliffs and ample food supplies. Legends emphasise the importance of the river and it remains sacred to Whanganui iwi. Māori along the coast and lowland plains grew kumara and other crops. The Manawatu River runs across the centre of the region, from rolling hill country in the east to the fertile Manawatu Plains in the west. The main city of Palmerston North is located on these plains, and is an important service city for the southern North Island as a whole. This river is unusual, in that it passes from hill country to plains through a gorge cut into much higher country, an indication that the hills have risen since the river formed.

To the southeast, a further, more sparsely populated area lies between the sources of the Manawatu River and the Pacific coast. This area, often historically connected with both the Hawke's Bay region to the north and the Wairarapa to the south, was historically simply known as Bush, a name which still survives in some businesses and organisations, most notably in the name of the Wairarapa-Bush Rugby Football Union.

The two river catchments have very different natures. While the open Manawatu Plains became more densely settled by Europeans, inland Ruapehu, Rangitikei and Whanganui remained more Māori-dominated, remote and independent, and is still heavily forested. As late as the 1950s the Whanganui River remained a river of mystery. Since then exploitation of the river's commercial potential has opened up the area, often causing friction with local Māori, who have long-standing grievances. Manawatu-Wanganui as a whole is one of the most important pastoral areas in New Zealand, its status recognised when the government opened the Massey Agricultural College in the 1920s.

Much of Manawatu-Wanganui was fertile and bush-covered when Europeans arrived and developed the area as a source of timber. Saw milling and flax milling dominated the 19th century, followed by an influx of sheep farmers who exploited the newly cleared ground. Deforestation, burn-offs of timber and scrub and large scale drainage combined with overgrazing, resulted in considerable environmental degradation. In the early 1900s authorities realised that careful management was needed to maintain this important agricultural area.

Manawatu-Wanganui takes up a large proportion of the lower half of the North Island. It is the second-largest local government region in the North Island and the sixth-largest in New Zealand, totalling 22,215 km2 (8.1% of New Zealand's land area). The region stretches from north of Taumarunui to south of Levin on the west coast, and across to the east coast from Cape Turnagain to Owhanga. It borders the Waikato, Taranaki, Hawke's Bay and Wellington regions and includes river catchment areas that run from the volcanic plateau to the sea. The Pacific Ocean is the eastern boundary and the Ruahine Ranges form a natural boundary with Hawke's Bay.

The area includes a variety of landscape formations. Districts close to the Volcanic Plateau are higher and more rugged, often subject to harsh temperatures in winter. The Manawatu District has a much gentler topography, consisting mainly of the flat, tree-studded Manawatu Plains that run between the ranges and the sea. The land was under the sea till about 500,000 years ago and still has a very thick layer of marine sediment, which is about five or six million years old. A block faulting system underneath the thick sediment has raised a series of domes and gentle depressions. These structures can provide natural storage areas for oil and some of the Manawatu domes have been drilled. The domes have shaped the course of the Manawatu River, giving it a meandering path which, uniquely among New Zealand rivers, begins close to the east coast and exits on the west coast. The Manawatu River begins just inside the Hawke's Bay region, then flows through a deep gorge to the Manawatu Plains before exiting in the Tasman Sea. The river is also unique in New Zealand (and rare worldwide) in that this gorge (the Manawatu Gorge) is a water gap through recently uplifted rock, causing the river to flow from relatively low-lying land along an eroded course through higher terrain. The Whanganui District is more rugged, with canyon-like valleys and gorges carved out of the soft rock by rivers and ocean waves.

The region includes a series of mountain ranges, notably the Tararua and the Ruahine Ranges and the three major active volcanoes of the North Island. Mount Ruapehu at 2,797 m is the tallest mountain in the North Island, Ngauruhoe 2,291 m and Tongariro 1,968 m. During the last 100 years Ruapehu has experienced six significant eruptions, and last erupted in 1995 and 1996.

Three major rivers divide the region: the Whanganui (290 km), Manawatu (182 km) and Rangitikei (241 km). The Whanganui is the second-longest river and has the second-largest catchment in the North Island, draining most of the inland region west of Lake Taupo. There are few roads in this area, which contains some of the largest surviving areas of native bush in the North Island.

Soils are productive with the addition of fertiliser. In the Manawatu and Horowhenua Districts there are sandy soils and swampy hollows around the coast with loess-covered terraces and river flats inland. These river flats and swamp areas contain fertile alluvial and organic soils. On the drier terraces inland yellow-grey earths predominate. The flatter more fertile soils suit intensive sheep farming and cropping while the hill country of Rangitikei favours semi-intensive sheep and beef farming. Areas close to the volcanic plateau consist largely of pumice soils which lack some essential trace elements but within the region much of this land is occupied by national parks.

The region has a comparatively mild climate with greater climatic extremes inland. Chateau Tongariro experienced the lowest temperature recorded in the North Island, falling to -13.6 °C on 7 July 1937. In summer the region is warm, with a maximum mid-summer daily average of between 20.1 and 22.9 °C. Sunshine hours approximate the national average for much of the region (1,800-2,000 hours per annum) but Palmerston North is defined as cloudy with an average of 1,725 sunshine hours. In the winter the minimum mid-winter daily average for coastal areas is 4.0 to 7.9 °C, while inland areas are considerably colder. Waiouru has a minimum mid-winter daily average of 0.1 °C.

Rainfall on the plains is slightly below average, with Palmerston North receiving 960 mm, while the rest of the region receives the New Zealand average rainfall of 1,000-2,000 mm.

The region contains areas of great ecological significance, reflected in the designation of approximately a seventh of its land area as part of the nation's conservation estate. Tongariro National Park is the largest park in the region (795.98 km2) and is the oldest national park in the country, established in 1887. The volcanoes Tongariro, Ruapehu and Ngauruhoe are sacred to Māori and were given to the nation by Te Heuheu Tukino IV, paramount chief of Ngati Tuwharetoa. They form the nucleus of the park, which is designated a world heritage area.

Whanganui National Park is slightly smaller (742.31 km2) and was established 99 years later when a series of reserves were incorporated into one area and given national park status. There are two state forest parks in the rugged, bush-clad Ruahine and Tararua Ranges. The four parks offer skiing, tramping, jetboating and white-water rafting and the opportunity to appreciate the environment.

The regional council, responsible for managing natural and physical resources, provides flood protection and monitors environmental problems such as pest infestation and pollution. Invasive plant pests such as African feathergrass, goats rue and nodding thistle pose a threat to pastureland in this heavily agricultural-dependent region, and the council has instituted control campaigns. The council has also instituted animal pest control programmes. Possums are perceived as the major animal pest since they damage native forests and endanger cattle production through the spread of bovine tuberculosis. Eradication programmes also concentrate on rabbits, rooks and feral goats, while other exotic species such as Parma wallaby (Macropus parma), wasps, ferrets, stoats and weasels are a source of concern. 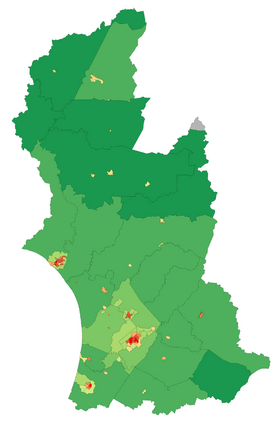 Population density in Manawatu-Wanganui at the 2006 census

There are two major urban areas. Palmerston North, with a resident population of 85,300 (June 2012 estimate), expanded as an educational centre and a supply centre for the surrounding rural hinterland. It became a city in 1930. The other major urban area is Whanganui, with an estimated resident population of 39,600 (June 2016s). Other urban centres include Levin (19,550), Feilding (14,600), Dannevirke (6,000), Taumarunui (5,000), Foxton (5,000), and Marton (5,000). The region also includes the smaller towns of Bulls, Ohakune, Waiouru, Raetihi, Taihape, Woodville, Pahiatua, Eketāhuna, Ashhurst, Foxton Beach, Turakina, Sanson, Shannon and Manakau.

City life does not dominate, as half the population live outside a large urban area, over a third in small towns or rural areas. While manufacturing has become an important part of the economy, most businesses are agriculturally based and agriculture remains the linchpin. The dominance of agriculture, combined with the relatively small scale of most urban areas, gives a rural quality to the region, quite distinct from the neighbouring Wellington Region. The rugged interior has become one of the main training areas for the New Zealand Defence Force, which maintain three bases in the region: RNZAF Base Ohakea, Linton Military Camp, and Waiouru Military Camp.

All content from Kiddle encyclopedia articles (including the article images and facts) can be freely used under Attribution-ShareAlike license, unless stated otherwise. Cite this article:
Manawatu-Wanganui Facts for Kids. Kiddle Encyclopedia.