McDermitt is an unincorporated community straddling the Nevada–Oregon border, in Humboldt County, Nevada, and Malheur County, Oregon, in the United States. McDermitt's economy has historically been based on mining, ranching, and farming. The last mining operation closed in 1990, resulting in a steady decline in population.

As of the 2010 census, the combined population was 513. Seventy-five percent of the residents were American Indian, predominantly Northern Paiute of the Fort McDermitt Indian Reservation, whose members include Shoshone people.

The community, originally called Dugout, was named after Fort McDermit. It was named after Lt. Col. Charles McDermit, commander of the Military District of Nevada, who was killed in a skirmish in the area in 1865. It is not known why there is a discrepancy in the spelling. Fort McDermit, which was five miles (8 km) outside the current township, was originally established to protect the stagecoach route from Virginia City through Winnemucca to Silver City, Idaho Territory. The stage road was the military's most important transportation route in southeast Oregon. The township of Dugout was established as support for Fort McDermit.

McDermitt is in the Oregon High Desert with a semi-arid climate (Köppen climate classification BSk), averaging 9.2 inches (236 mm) of rain annually with hot, dry summers and cold winters. Most precipitation (47%) occurs from March through June. About 23% occurs from September through November, and 25% from December through February, much as snow.

The McDermitt area boasts the longest climatic record in Nevada, with data beginning in 1866. The earliest Nevada climate stations were at Army posts. The U.S. Army Signal Corps was responsible for weather duty in the late 19th century and established the National Weather Service in 1870. 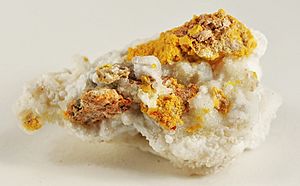 The state line goes through the White Horse Inn, a historical landmark now being restored, which was a saloon and hotel. When it was open, food could be ordered and paid for in Oregon, avoiding the Nevada state sales tax.

All content from Kiddle encyclopedia articles (including the article images and facts) can be freely used under Attribution-ShareAlike license, unless stated otherwise. Cite this article:
McDermitt, Nevada–Oregon Facts for Kids. Kiddle Encyclopedia.