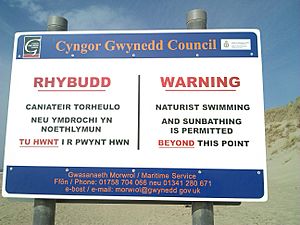 Morfa Dyffryn beach is on the west coast of Wales, between Barmouth and Harlech in Gwynedd. This sandy beach is several miles long and is chiefly known for having an officially recognised naturist area, 1 kilometre (1,100 yd) in length. The beach is very clean and is also known for regular sightings of dolphins.

The nearest settlements are the villages of Dyffryn Ardudwy and Llanbedr where several camp and caravan sites and guest-houses are available.

Naturism has been practised at Morfa Dyffryn since the late 1930s. The beach can attract several hundred naturists in summer during fine weather - despite which, it is rarely crowded. Most visitors come from North Wales and North West England, although visitors from mainland Europe are not unknown.

The naturist section of the beach is now clearly marked by signs at both ends. Some naturists complain that the official section is too small - the traditional naturist area was 1 mile (1.6 km) in length.

The naturist section of the beach is up to 30 minutes' walk from the nearest car parks.

All content from Kiddle encyclopedia articles (including the article images and facts) can be freely used under Attribution-ShareAlike license, unless stated otherwise. Cite this article:
Morfa Dyffryn Facts for Kids. Kiddle Encyclopedia.