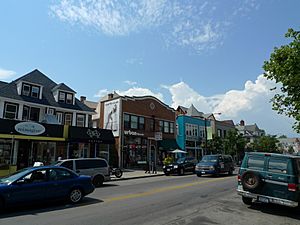 Buffalo consists of 32 different neighborhoods, over an area of 52 sq. mi The following is a list of neighborhoods defined by the University at Buffalo.

The Hamlin Park Historic District was listed on the National Register of Historic Places in 2013.

South Buffalo, which was split by the construction of Interstate 190 during the 1950s, is troubled by the presence of a concrete crushing facility which is grandfathered in as a pre-existing use, while dust and truck traffic from the facility strongly affect residences in the neighborhood.

All content from Kiddle encyclopedia articles (including the article images and facts) can be freely used under Attribution-ShareAlike license, unless stated otherwise. Cite this article:
Neighborhoods of Buffalo, New York Facts for Kids. Kiddle Encyclopedia.