Perth railway station is a railway station located in the city of Perth, Scotland. The station, designed by Sir William Tite, won an architecture prize. It has seven platforms, five of which are "through" platforms.

There are two entrances, both of which allow car parking. The ticket office, newsagent and café are between Platforms 2 and 3. The original main concourse was between the current Platforms 4 and 7, and the station was covered by a large overall roof, which still exists in a reduced form. There used to be nine platforms. Ticket barriers are in operation.

The station was opened (as Perth General) by the Scottish Central Railway in 1848. Originally the terminus of the SCR main line from Greenhill Junction near Glasgow, it soon became a junction of some importance with the arrival of the Dundee and Perth Railway from Dundee (following the completion of a bridge across the River Tay), the Edinburgh and Northern Railway from Ladybank on the Fife coast and the Scottish Midland Junction Railway from Forfar within months. Subsequent construction by the Perth and Dunkeld Railway and the Perth, Almond Valley and Methven Railway added further lines into/out of the city, with the former becoming part of what is now the Highland Main Line to Inverness. The SMJR meanwhile would become part of a through route to Aberdeen by 1856, thus giving Perth travellers easy access to all of the major Scottish cities.

All of these lines, apart from the E&NR would eventually be taken over by the Caledonian Railway, though the Highland Railway (which took over the P&DR) and North British Railway (which absorbed the E&NR) also had access by means of running powers from Stanley Junction and Hilton Junction respectively.

The NBR would subsequently open a more direct route to the Scottish capital than the Caledonian's route via Stirling and the central lowlands in 1890 - this left the existing Ladybank line at Bridge of Earn and headed south via Glenfarg to Mawcarse, where it joined the Fife and Kinross Railway's line to Kinross. Trains could then travel via Cowdenbeath, Dunfermline and the newly opened Forth Rail Bridge to reach Edinburgh.

The Almond Valley line to Crieff & Methven was an early post-nationalisation casualty, closing to passengers in October 1951. The Ladybank service followed suit in September 1955. The major losses though came as the result of the Beeching Axe and its aftermath in the mid-to-late 1960s, with the ex-SMJR main line to Kinnaber Junction via Coupar Angus and Forfar being closed to passenger traffic on 4 September 1967; Aberdeen services were thereafter routed via Dundee and the former NBR route via Montrose. The Aviemore to Forres section of the Highland Main Line had already been closed two years earlier, and several local stations in the area were also shut down around this time.

A further significant (and controversial) closure came on 5 January 1970, when the Glenfarg line to Kinross and Cowdenbeath was abandoned in favour of the older but less direct line via Stirling. This route had been recommended for retention and development in the Beeching Report, but its removal allowed the planned M90 motorway to occupy its former alignment in the Glenfarg area when it was built a few years later. The additional time penalty associated with the rerouting proved unpopular with Edinburgh travellers though and so in 1975, the old E&NR line to Ladybank was reopened by British Rail to provide a slightly quicker alternative, the route followed by most Edinburgh services today, but the daytime and overnight trains to London (see below) still run via Stirling and Falkirk as the line via Ladybank and Kirckaldy is served by the Aberdeen to London services. 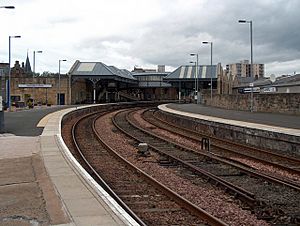 As mentioned above, the station has seven active platforms, but they are split into two distinct sections. Platforms 1 and 2 sit on the eastern side (the old Dundee & Perth Railway part of the station) and are the busiest in the station due to them handling the Glasgow to Dundee and Aberdeen trains. The two platform lines then become single further east to cross the bridge spanning the Tay. The remainder of the platforms (3-7) sit under the main train shed, the former HR/SMJR platforms once used by the Coupar Angus main line as well as services to the Highlands. They now are used only by terminating trains from the Edinburgh direction and around a dozen trains per day each way on the Highland Main Line.

There was once an extensive goods yard here, along with an engine shed and carriage sidings but only a small engineers depot remains in the greatly downsized yard.

Passenger services are operated by Abellio ScotRail, Caledonian Sleeper, and Virgin Trains East Coast, and the station is staffed throughout its opening hours.

There are two main routes passing through the station - the Glasgow to Dundee & Aberdeen Line and the Highland Main Line, whilst there is now also a regular service to/from Edinburgh via the Fife Coast. Services to both Glasgow Queen Street and Edinburgh Waverley depart hourly (with some extras to Glasgow), as do those to Aberdeen via Dundee, Carnoustie and Arbroath. Trains to Inverness are somewhat irregular, but run at least once every two hours with eleven departures in all on weekdays & Saturdays and seven on Sundays.

In March 2016, Transport Scotland announced a package of timetable improvements for the Scottish rail network that will see additional trains operated from Perth to Glasgow, Edinburgh, Dundee & Inverness from 2018. There will be a two-hourly service between both Edinburgh & Glasgow and Inverness over the Highland Main Line (combining to give an hourly frequency north of Perth) and additional regional services from Arbroath & Dundee to Glasgow serving Gleneagles, Dunblane & Stirling on top of the current Aberdeen to Glasgow route (which will be accelerated by cutting some of the existing intermediate stops).

The movie The Railway Man was filmed at Perth station posing as Crewe during the 1960s.

Perth station was nominated the Carbuncle award in 2015 which recognizes the worst planning decision. The award was due to the fact a new footbridge had to be built at the South Side of the station which has stair and lift access to all platforms to comply with disability laws. Local newspaper The Courier reported on the news and interviewd Paul Tetlaw from the campaign Transform Scotland. He said:

"It's an off-the-shelf structure that has desecrated the station environment, imposed from London by 'standards bound' Network Rail designers and has no fit with the largely Victorian surroundings. To add insult to injury, it's virtually unused, as the alternatives within the station building are vastly more convenient for the overwhelming majority of passengers. This tacky and inappropriate new structure is thought to have cost in excess of £1m — money which would have been better spent on opening a new station in nearby Newburgh, which has none, with cash left over for a feasibility study of recreating a direct Perth-Edinburgh link, as advocated by our inter-city express campaign."

All content from Kiddle encyclopedia articles (including the article images and facts) can be freely used under Attribution-ShareAlike license, unless stated otherwise. Cite this article:
Perth railway station, Scotland Facts for Kids. Kiddle Encyclopedia.