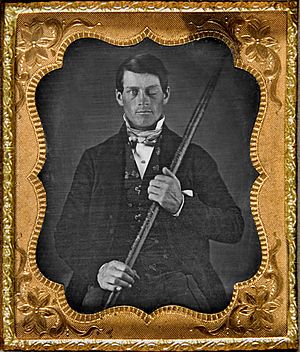 Gage holding the iron that impaled his skull in 1849

Phineas P. Gage (July 9, 1823 – May 21, 1860) was an American railroad construction foreman. He is known for his unlikely survival of an accident in which a large iron rod was driven completely through his head, destroying much of his brain's left frontal lobe. This caused effects on his personality and behavior over the remaining 12 years of his life.

Gage was born in Lebanon, New Hampshire. He died on May 21, 1860 in the San Francisco Bay Area from status epilepticus (a form of a seizure), aged 36.

All content from Kiddle encyclopedia articles (including the article images and facts) can be freely used under Attribution-ShareAlike license, unless stated otherwise. Cite this article:
Phineas Gage Facts for Kids. Kiddle Encyclopedia.