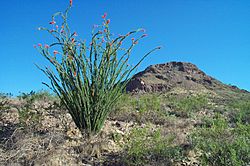 Additionally, South Mountain Park is sometimes included in this group.

Originally, the park system began with Piestewa Mountain Park and North Mountain Park as county parks. However, most of the existing municipal park system was acquired in the early 1970s when Phoenix's ever-expanding development threatened to encroach on these mountainous areas. All feature extensive hiking trails and many have public access areas with parking, ramadas (picnic tables) and restrooms. Some offer nearby horse stables where horses can be rented and ridden into the park.

All content from Kiddle encyclopedia articles (including the article images and facts) can be freely used under Attribution-ShareAlike license, unless stated otherwise. Cite this article:
Phoenix Mountains Preserve Facts for Kids. Kiddle Encyclopedia.