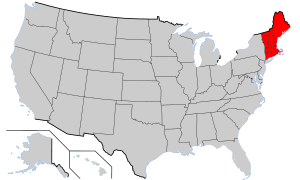 The New England region of the United States is shaded in red, above.

The politics of New England has long been defined by the region's political and cultural history, demographics, economy, and its loyalty to particular U.S. political parties. Within the politics of the United States, New England is sometimes viewed in terms of a single voting bloc.

Same-sex marriage is permitted in all six New England states, with Rhode Island being the final state to legalise the practice in May 2013. In Maine, it was legalized by the legislature in 2009, but defeated in a referendum (53% voted to ban it versus 47% who voted to legalize it) later the same year. On January 26, 2012, supporters of a ballot initiative to repeal that decision obtained sufficient petition signatures to ensure the initiative appeared on the November 2012 ballot, where the initiative won 53–47.

The national U.S. movement against nuclear power had its roots in New England in the 1970s. In 1974, activist Sam Lovejoy toppled a weather tower at the site of the proposed Montague Nuclear Power Plant in Western Massachusetts. The movement "reached critical mass" with the arrests at Seabrook Station Nuclear Power Plant on May 1, 1977, when 1,414 anti-nuclear activists from the Clamshell Alliance were arrested at the Seabrook site. Harvey Wasserman, a Clamshell spokesman at Seabrook, and Frances Crowe of Northampton, an American Friends Service Committee member, played key roles in the movement.

All content from Kiddle encyclopedia articles (including the article images and facts) can be freely used under Attribution-ShareAlike license, unless stated otherwise. Cite this article:
Politics of New England Facts for Kids. Kiddle Encyclopedia.