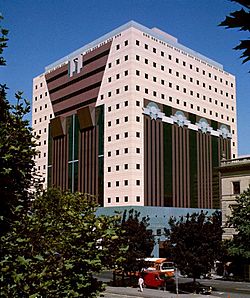 Postmodernism is a way of thinking about culture, philosophy, art and many other things. The term has been used in many different ways at different times, but there are some things in common.

Starting with the 18th century Enlightenment and into the early 20th century, many people believed that science and new knowledge would make the world better. When scientists or philosophers discovered something new, it would always make society a little bit better. They thought that social progress could not be stopped. Modernism especially believed this. But postmodernism says that there is no real social progress. It says that while some things about the world change, people only want to believe that the world is better than it was. It changes but does not get better, because there is no 'better.'

Postmodernism says that since peoples' opinions change, and since one person's opinion cannot be more right than another, it means nothing to say that (for example) one work of art is better than any other. Postmodernism says that art, music, and literature, for example, can be anything that its maker says that it is. Postmodern art and literature commonly talks about itself and makes fun of itself. It makes fun of 'serious' art and even the idea of art. Postmodernism has influenced many cultural fields, including literary criticism, philosophy, sociology, linguistics, architecture, visual arts, and music.

Postmodernist ideas can be seen in philosophy, the study of culture and society, literature, architecture, design, as well as in history and law. Postmodernism also led people to think differently about love, marriage, popular culture, and the change in much of the Western world from an industrial to service economy.

The term postmodernity usually means the period of time when postmodern ideas became common (the second half of the 20th century). Some experts think that postmodernism is now over, especially in literature.

The term "Postmodernism" is often used to refer to different, sometimes contradictory (they cannot both be right) concepts. Common definitions are:

"When it becomes possible for a people to describe as ‘postmodern’ the décor of a room, the design of a building, the diegesis of a film, the construction of a record, or a ‘scratch’ video, a television commercial, or an arts documentary, or the ‘intertextual’ relations between them, the layout of a page in a fashion magazine or critical journal, an anti-teleological tendency within epistemology, the attack on the ‘metaphysics of presence’, a general attenuation of feeling, the collective chagrin and morbid projections of a post-War generation of baby boomers confronting disillusioned middle-age, the ‘predicament’ of reflexivity, a group of rhetorical tropes, a proliferation of surfaces, a fascination for images, codes and styles, a process of cultural, political or existential fragmentation and/or crisis, the ‘de-centring’ of the subject, an ‘incredulity towards metanarratives’, the replacement of unitary power axes by a plurality of power/discourse formations, the ‘implosion of meaning’, the collapse of cultural hierarchies, the dread engendered by the threat of nuclear self-destruction, the decline of the university, the functioning and effects of the new miniaturised technologies, broad societal and economic shifts into a ‘media’, ‘consumer’ or ‘multinational’ phase, a sense (depending on who you read) of ‘placelessness’ or the abandonment of placelessness (‘critical regionalism’) or (even) a generalised substitution of spatial for temporal coordinates - when it becomes possible to describe all these things as ‘Postmodern’ (or more simply using a current abbreviation as ‘post’ or ‘very post’) then it’s clear we are in the presence of a buzzword".

British historian Perry Anderson says that postmodernism is an important concept and is important for the study of contemporary (current) culture.

All content from Kiddle encyclopedia articles (including the article images and facts) can be freely used under Attribution-ShareAlike license, unless stated otherwise. Cite this article:
Postmodernism Facts for Kids. Kiddle Encyclopedia.