Running Creek is a large rural locality in the Scenic Rim Region on the southern border of Queensland, Australia. In the 2011 census, Running Creek and surrounding localities had a population of 463 people. 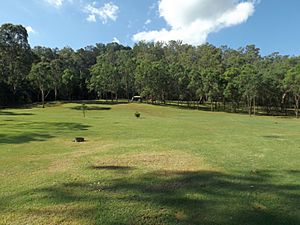 Mount Chinghee and Mount Chinghee National Park are located in the south east of Running Creek. The national park has no walking tracks or visitor facilities. It aims to protect remnant rainforest and preserve habitat. The Sydney–Brisbane rail corridor traverses the length of the north south axis of Running Creek. At the border the railway enters a tunnel which is part of the Cougal Spiral. Nearby the Lions Road passes through Richmond Gap on the McPherson Range and links to Cougal in northern New South Wales. The Beaudesert Shire Tramway had a stop in Running Creek called Dulbolla station. 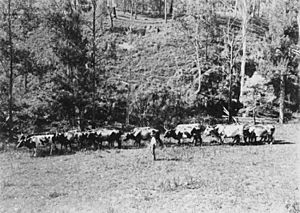 The terrain is generally hilly with elevations rising in the south to well above 600 metres along the McPherson Range. It covers the area roughly equivalent to the catchment formed by Running Creek, with the exception of its most upper parts which lie in Mount Gipps and Southern Lamington. Running Creek, itself a tributary of the Logan River, has a number of tributaries including New Year Creek and Camp Creek. Vegetation has been cleared in many parts for primary production purposes.

The Glenapp railway hut is located along the Brisbane to Sydney railway line at Running Creek. The hut was established in 1930 and is only one of a few remaining intact in the country. Telemon Environment Park which later became known as Mount Chinghee National Park was first gazetted in 1994.

All content from Kiddle encyclopedia articles (including the article images and facts) can be freely used under Attribution-ShareAlike license, unless stated otherwise. Cite this article:
Running Creek, Queensland Facts for Kids. Kiddle Encyclopedia.