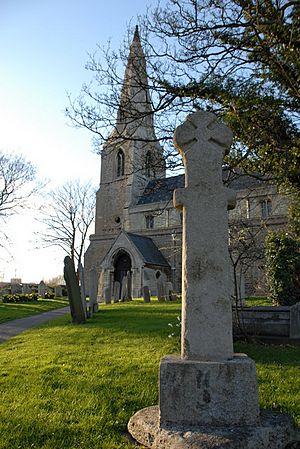 Stanground is a residential area near the city of Peterborough, Cambridgeshire in the United Kingdom. For electoral purposes it comprises Stanground Central and Stanground East wards in North West Cambridgeshire constituency. Cambridgeshire Fire and Rescue Service maintain a fire station, crewed day and night and equipped with Water Tender and Multistar (Aerial platform) , off Whittlesey Road.

Situated south of the River Nene, on relatively high ground overlooking The Fens, the area was historically part of the Isle of Ely in Cambridgeshire and of Huntingdonshire, rather than the Soke of Peterborough in Northamptonshire. By 1901 Stanground was the only civil parish in England contained partly in two administrative counties. In 1905 the part in the county of Huntingdon was created a separate parish, Stanground South, within Old Fletton Urban District and the anomaly removed; the remainder, in Thorney Rural District, becoming Stanground North. In 1965 Huntingdonshire and the Soke amalgamated as Huntingdon and Peterborough and the Isle of Ely and historic Cambridgeshire (excluding Thorney Rural District which transferred to Huntingdon and Peterborough) amalgamated as Cambridgeshire and the Isle of Ely. In 1974 Thorney Rural District and Old Fletton Urban District became part of the current district in the new non-metropolitan county. As part of a Rural District prior to the passing of the Act, Stanground North remained parished. This redundant parish which contained no dwellings or residents was finally abolished in 2003.

The ecclesiastical parish of Stanground is in the Diocese of Ely and covers the whole area. Because it also falls close by, although not part, of the City of Peterborough, in addition to the oversight of the Bishop of Ely, the Bishop of Peterborough, acting as Assistant Bishop in the Diocese of Ely shares the pastoral oversight. Lampass Cross, a 12th-century scheduled monument, stands in the churchyard. The parish, along with its church, appears as Stoneground in the ghost stories of E. G. Swain, who was vicar there from 1905–1916. Situated adjacent to the fire station, Stanground cemetery, which opened in 1890, has limited grave availability for those residents who have family already buried there.

All content from Kiddle encyclopedia articles (including the article images and facts) can be freely used under Attribution-ShareAlike license, unless stated otherwise. Cite this article:
Stanground, Peterborough Facts for Kids. Kiddle Encyclopedia.