Stapleton is a neighborhood in Denver, Colorado. Located 15 minutes Northeast of downtown Denver, the development is on the site of the decommissioned Stapleton International Airport, which closed in 1995. Now referred to as the Stapleton Community, Stapleton contains nine neighborhoods, nine schools public/private, 50 parks, several shopping and business districts, even its own visitor center. Planned to be operational by the year 2016. Stapleton is connected to the rest of the Denver metro area by a recently opened commuter rail line.

While Denver International Airport was being constructed, planners began to consider how the Stapleton site would be redeveloped. A private group of Denver civic leaders, the Stapleton Development Foundation, convened in 1990 and produced a master plan for the site in 1995, emphasizing a pedestrian-oriented design rather than the automobile-oriented designs found in many other planned developments. Nearly a third of the airport site was slated for redevelopment as public park space.

The former airport 4,700 acres (19 km2) site 10 minutes from Downtown Denver is now being redeveloped by Forest City Enterprises new urbanist project. Construction began in 2001, and as of 2008[update], 3,200 single-family houses, row houses, condominiums and other for-sale housing, as well as 400 apartments, had been built. The new community is zoned for residential and commercial development, including office parks and "big box" shopping centers. Stapleton is by far the largest neighborhood in the city of Denver and an eastern portion of the redevelopment site lies in the neighboring city of Aurora. 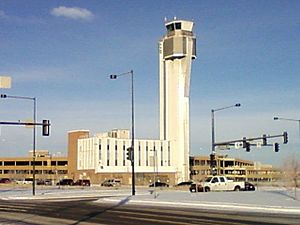 The old Stapleton Control Tower as seen in 2008

Three years later, more than 14,000 people called Stapleton home and the trail network reached 38 miles. In 2011, Stapleton received national recognition as the site of the 2011 HGTV Green Home. Additionally, a new interstate interchange opened, connecting Central Park Boulevard to I-70, I-270 and neighborhoods south of the interstate. Now, Stapleton is celebrating 10 years of residential growth.

Stapleton is served by the Central Park commuter rail and bus station, with direct connections to Union Station in downtown and the Denver International Airport via the A Line.

All content from Kiddle encyclopedia articles (including the article images and facts) can be freely used under Attribution-ShareAlike license, unless stated otherwise. Cite this article:
Stapleton, Denver Facts for Kids. Kiddle Encyclopedia.