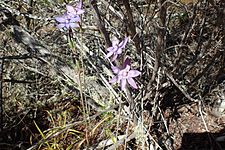 Thelymitra granitora, commonly called the coastal granite sun orchid or coastal sun orchid, is a species of orchid in the family Orchidaceae and is endemic to the south-west of Western Australia. It has a single short, curved and channelled dark green leaf and up to eight relatively large pale blue or white, self-pollinating flowers with white mop-like tufts on the top of the anther.

Thelymitra granitora was first formally described in 1998 by David Jones and Mark Clements from a specimen collected near Torbay and the description was published in The Orchadian. The specific epithet (granitora) is derived from the Latin graniticus meaning 'granite' or 'granite rocks', referring to the granite habitat preference of this species.

The coastal granite sun orchid often grows in clumps and is found in shallow soil pockets on granite outcrops in coastal areas between Meelup Beach in the Meelup Regional Park and Israelite Bay.

Thelymitra granitora is classified as "not threatened" by the Western Australian Government Department of Parks and Wildlife.

All content from Kiddle encyclopedia articles (including the article images and facts) can be freely used under Attribution-ShareAlike license, unless stated otherwise. Cite this article:
Thelymitra granitora Facts for Kids. Kiddle Encyclopedia.