Westfield Horton Plaza, not to be confused with its adjacent namesake Horton Plaza, is a five-level outdoor shopping mall located in downtown San Diego known for its bright colors, architectural tricks, and odd spatial rhythms. It stands on 6.5 city blocks adjacent to the city's historic Gaslamp Quarter. It was the first successful downtown retail center since the rise of suburban shopping centers decades earlier.

A 1972 proposal for the shopping center and a redevelopment district arose out of plans to "refurbish San Diego's historic town plaza", Horton Plaza. Due to numerous setbacks and resistance from preservation groups, construction did not begin until 1982. The plaza is named for Alonzo Horton, who was largely responsible for the location of downtown San Diego. 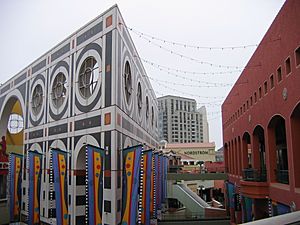 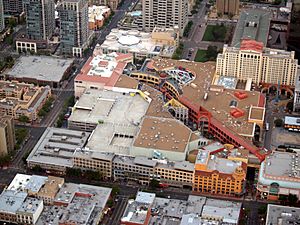 Horton Plaza was the $140 million centerpiece of a downtown redevelopment project run by The Hahn Company, and is the first example of architect Jon Jerde's so-called "experience architecture".

Jerde's project was based on Ray Bradbury's essay "The Aesthetics of Lostness". In it he extolled the virtues of getting "safely lost" as adults inspired by side streets of Paris, London, or New York.

Horton Plaza was an instant financial success and while some credited it for revitalizing downtown San Diego, others said the revitalization benefitted the mall.

When originally built, the center housed the historic Jessop's Clock, built in 1907, which formerly stood on a sidewalk in front of the Jessop and Sons jewelry store in Downtown San Diego.

On January 11, 2011, the San Diego City Council unanimously approved a plan to raze the former Robinsons-May building on the north side of the mall to make way for a 37,000 square feet (3,400 m2) urban park, effectively enlarging the adjacent, historic Horton Plaza and Broadway Fountain.

In 2012 Westfield said it would not renew the lease on the Jessop's Clock and gave its owners (descendants of the clock's builder Joseph Jessop) six months to find a new location for it. However, the heirs had trouble finding an appropriate location, and as of 2016 the clock is still at Westfield Horton Plaza.

All content from Kiddle encyclopedia articles (including the article images and facts) can be freely used under Attribution-ShareAlike license, unless stated otherwise. Cite this article:
Westfield Horton Plaza Facts for Kids. Kiddle Encyclopedia.