Wujal Wujal is a small Aboriginal community on the north and south sides of the Bloomfield River in northern Queensland, Australia. It has an area of 19.94 square kilometres of land. At the 2006 census, Wujal Wujal had a population of 326. 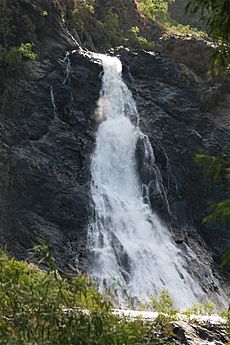 The waterfalls are very sacred to the community. The general public have access only to one waterfall as the other larger falls are only for the eyes of the female members of the community.

Tours are available by four wheel drive vehicles from Cairns and Cape Tribulation via the Bloomfield Track.

In 2003, the Walker family, one of the family groups of the Kuku Yalanji people, commenced their rainforest tours on their traditional country at Thompson Creek, six km south of Wujal Wujal. Guided walks to the Bloomfield Falls have recently been added as another opportunity in their business.

All content from Kiddle encyclopedia articles (including the article images and facts) can be freely used under Attribution-ShareAlike license, unless stated otherwise. Cite this article:
Wujal Wujal, Queensland Facts for Kids. Kiddle Encyclopedia.