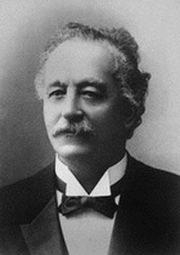 Ducommun was born in Geneva Switzerland on December 19, 1833. Ducommun worked as a tutor, language teacher, journalist and a translator for the Swiss federal Chancellery (1869–1873).

In 1867, he helped to found the Ligue de la paix et de la liberté (League for Peace and Liberty), though he continued working at other positions, including secretary for the Jura-Simplon Steel Company from 1873 to 1891. That year, he was appointed director of the newly formed Bureau international de la paix (International Peace Office), the first non-governmental international peace organization, based in Bern. He refused to accept a salary for the position, stating that he wished to serve in this capacity solely for reasons of idealism.

His keen organizational skills ensured the group's success. He was awarded in the Nobel Peace Prize in 1902 with Charles Albert Gobart. He served as director of the organization until his death.

All content from Kiddle encyclopedia articles (including the article images and facts) can be freely used under Attribution-ShareAlike license, unless stated otherwise. Cite this article:
Élie Ducommun Facts for Kids. Kiddle Encyclopedia.