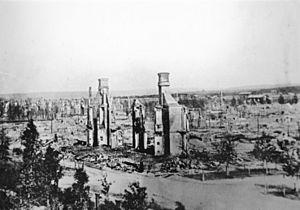 Umeå Old Prison's roof towards the northwest following the 1888 fire

The 1888 Umeå Fire (Swedish: branden i Umeå 1888) was a fire in the town of Umeå in Sweden. The fire happened on 25 June 1888. The fire occurred during a storm. The storm allowed the fire to spread fast among the wooden houses in town. When the town was rebuilt, stone houses became more common than wooden houses. Birchtrees were planted between the streets. This was because birchtrees are thought to not catch fire so easy. This has led to Umeå becoming known as the "town of birchtrees" (Swedish: Björkarnas stad). The same day a fire also occurred in the town of Sundsvall.

All content from Kiddle encyclopedia articles (including the article images and facts) can be freely used under Attribution-ShareAlike license, unless stated otherwise. Cite this article:
1888 Umeå fire Facts for Kids. Kiddle Encyclopedia.