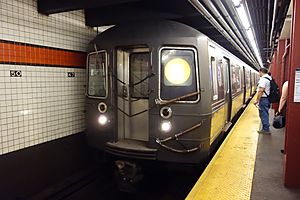 and by the <F> train during rush hours in the peak direction in 2018. This station is for the B, D, F and M trains.

It was the 12th busiest subway station in the system.

The station has local and express trains.

The station has local and express tracks.

And it is located in Midtown Manhattan

When you walk to 49th Street, you can see Radio City Hall

After this station, the next stations will be 57th Street , 5th Avenue 53rd Street , 7th Avenue and 42nd Street Bryant Park.

All content from Kiddle encyclopedia articles (including the article images and facts) can be freely used under Attribution-ShareAlike license, unless stated otherwise. Cite this article:
47th–50th Streets–Rockefeller Center station Facts for Kids. Kiddle Encyclopedia.