59th Street - Columbus Circle is a station on the IND Eighth Avenue Line and BMT Broadway - Seventh Avenue Line in the New York City Subway. Located at the intersection of 57th Street, 58th Street, 59th Street and 8th Avenue in Midtown Manhattan, It is served by the A, C, and 1 trains.

After this station on the Eighth Avenue Line, the next stations will be 72nd Street and 50th Street.

After this on the Seventh Avenue Line, the next stations will be 50th Street and 66th Street - Lincoln Center. 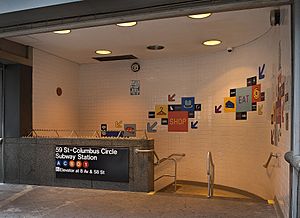 All content from Kiddle encyclopedia articles (including the article images and facts) can be freely used under Attribution-ShareAlike license, unless stated otherwise. Cite this article:
59th Street–Columbus Circle station Facts for Kids. Kiddle Encyclopedia.