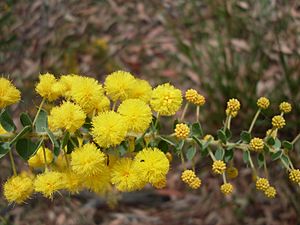 Acacia uncinata, commonly known as gold-dust wattle or round-leaved wattle, is a shrub belonging to the genus Acacia and the subgenus Phyllodineae that is native to parts of eastern Australia.

The species was first formally described by the botanist John Lindley in 1830 as part of the work Edwards's Botanical Register. It was reclassified as Racosperma uncinatum in 1987 by Leslie Pedley then transferred back to the genus Acacia in 2006. The specific epithet is reference to the phyllode's curved point. A. uncinata strongly resembles Acacia aureocrinita. Other synonyms include; Acacia oleifolia, Acacia dysophylla, Acacia undulifolia var. dysophylla and Acacia undulifolia.

It is found in the north eastern part of Mount Kaputar National Park in New South Wales where it grows along watercourses and on hillsides Eucalyptus and Callitris woodland communities in rocky sandy-loam soils.

All content from Kiddle encyclopedia articles (including the article images and facts) can be freely used under Attribution-ShareAlike license, unless stated otherwise. Cite this article:
Acacia uncinata Facts for Kids. Kiddle Encyclopedia.